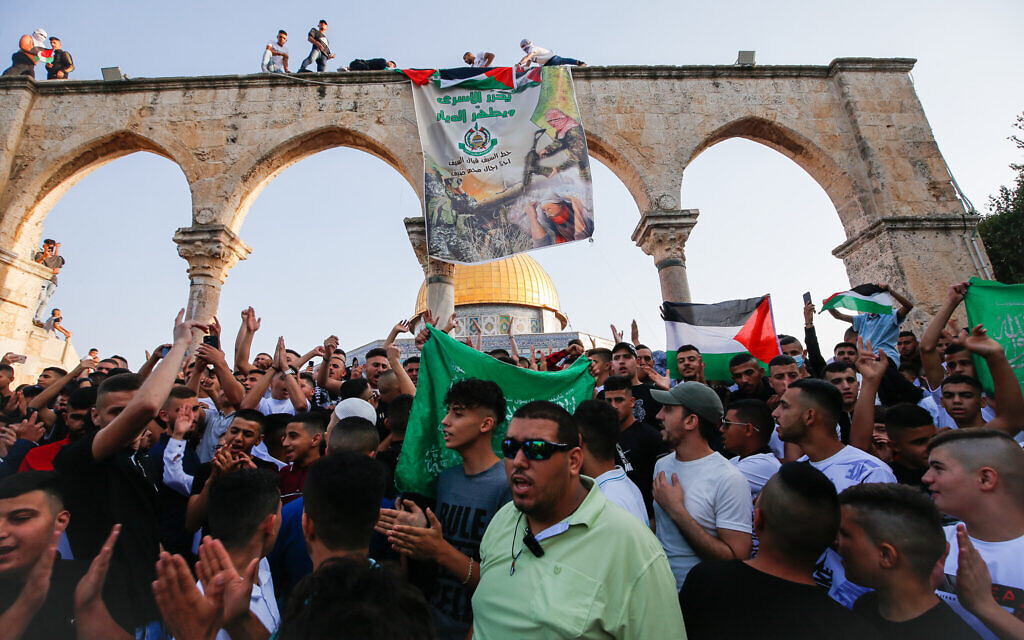 Four East Jerusalem residents were charged on Friday with alleged links to Hamas, with police prosecutors accusing some of planning attacks in the coming month after conducting weapons training and meeting with terror group leaders in Turkey.

Following a lengthy joint investigation with the Shin Bet security agency, police said three of the suspects – a family from Sur Baher – were arrested when they entered Israel last month.

A fourth suspect – a resident of Beit Hanina – was also arrested, with NIS 500,000 (about $155,000) in cash, vehicles and other property seized, as well as frozen bank accounts belonging to a charity organization.

The charity, Lajnat Zakat al-Quds, which has offices in the Temple Mount complex in Jerusalem’s Old City, has been accused of funneling money for Hamas, tax offenses and money laundering.

According to the indictment, one of the defendants, Khaled Sabah, was appointed in 2019 by senior Hamas figures in Turkey as the terror group’s treasurer in Jerusalem. He helped transfer Hamas funds from Turkey to Jerusalem and distribute them to Hamas members and their families, under the guise of the charity, prosecutors charged.

The charity advertised itself as helping orphans, but much of the funding went to the families of Hamas members killed in terror attacks or in clashes with Israeli forces, prosecutors charged.

Cash confiscated from an East Jerusalem charity, with alleged ties to Hamas, in February 2022. (Israel Police)

At the end of January this year, Sabah traveled to Turkey to meet with Hamas officials, during which they discussed the terror group’s preparations for the Muslim holy month of Ramadan, in the event of clashes with Israeli forces.

“During the meeting, the accused agreed that he would purchase a weapon for this purpose, if necessary,” the indictment states.

Sabah and her now arrested sons, Musab and Munib Sabah, received firearms training in Turkey in preparation for a potential attack, prosecutors said.

According to the indictment, Sabah was also ordered to recruit members for the terror group in Jerusalem and to “lay the groundwork” for activities during Ramadan.

The January meeting in Turkey came as negotiations were underway for President Isaac Herzog to hold a meeting with his Turkish counterpart, Recep Tayyip Erdogan. That meeting finally took place earlier this month.

According to a Channel 12 report, Herzog and Erdogan discussed Turkey’s relationship with the terror group Hamas, and in particular recent visits by Hamas leaders to Ankara – a long sore point for Israeli leaders.

Meanwhile, officials have warned of a possible outbreak of violence during Ramadan next month.

Shin Bet chief Ronen Bar spoke to his FBI counterpart in Washington this week about the matter. And Public Security Minister Omer Barlev, who oversees the police, warned in response to several recent stabbings in Jerusalem that “terrorists and extremists will try to set the area on fire” in the coming weeks. .

We tell a critical story

Israel is now a much bigger player on the world stage than its size suggests. As a diplomatic correspondent for The Times of Israel, I am well aware that Israel’s security, strategy and national interests are always under scrutiny and have serious implications.

It takes poise, determination, and knowledge to accurately convey the story of Israel, and I come to work every day aiming to do just that.

Financial support from readers like you allows me to travel to witness both the war (I have just returned from a report in Ukraine) and the signing of historic agreements. And it keeps The Times of Israel the place readers around the world turn to for accurate information about Israel’s relationship with the world.

If it’s important to you that independent, factual coverage of Israel’s role in the world exists and thrives, I urge you to support our work. Will you join the Times of Israel community today?