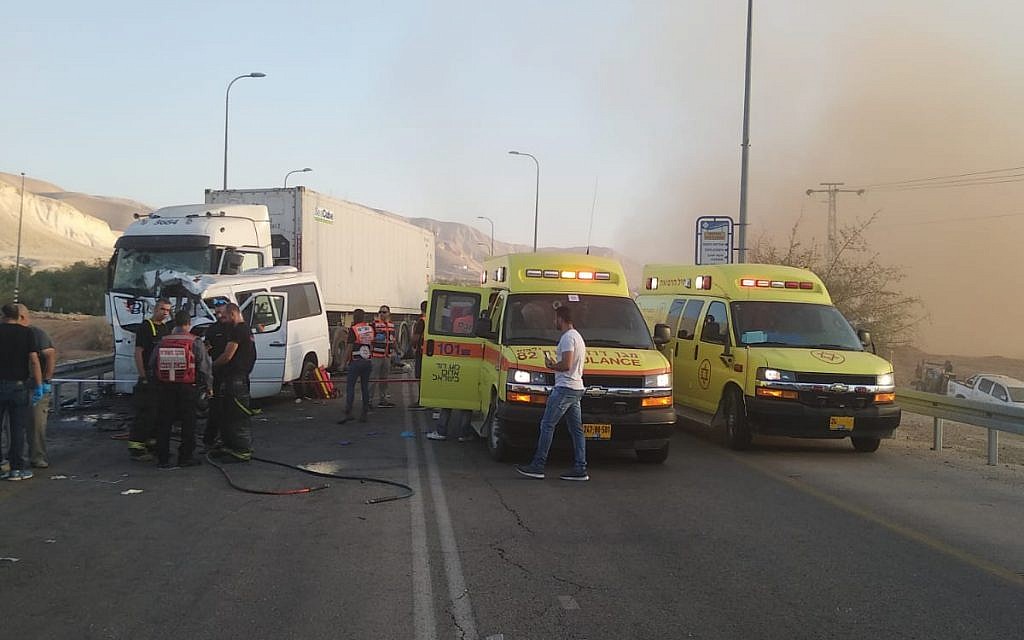 The six Palestinians from East Jerusalem who were killed in a car crash on Route 90 on Sunday morning were identified later in the day, as the death toll on the perilous route over the past three weeks rose to 17.

Also on Sunday, another accident on the same road left four people injured.

The victims of the crash on Sunday morning, when a minibus hit a truck head-on in the Jordan Valley, have been identified as brothers Lutfi and Rajai Zahdi of Wadi Joz; Ala’a Qarash from the Old City of Jerusalem; Ahmad al-Ayoubi of Za’im; Majd Asila of Kafr Akab; and Majd Samara of Kafr Akab.

Five other people were injured in the accident, which occurred near the Petzael junction, according to the Magen David Adom rescue services. At least four were seriously injured.

Later that day, four people were injured in another crash on Route 90 near the Dead Sea. Two sustained minor upper body injuries and two sustained minor injuries, according to the Magen David Adom ambulance service. An MDA helicopter arrived on the scene to help evacuate the injured.

In a third car crash elsewhere on Sunday, two Israel Defense Forces soldiers were injured after their car collided with a truck near Ramat Gan, the military said. One soldier sustained serious head injuries, the other sustained minor injuries, according to medics.

The soldiers were taken to Sheba Tel Hashomer Hospital in Ramat Gan for treatment. The accident occurred near the Bar Ilan junction on Route 471.

In the previous fatal crash, the minibus reportedly transported a group of Palestinian men in their 30s to their workplace. Police arrested the driver of the truck and opened an investigation into the accident.

Video footage from the scene appeared to show the truck veering into the opposite lane, at which point the minivan, in an attempt to dodge it, swerved and crashed into it.

The crash was the second major fatal accident on Route 90 in five days.

The Atar family, killed in a car crash near the Dead Sea on October 30, 2018 (Courtesy)

The minibus carrying the Atar family caught fire in the crash and some of the dead were killed in the blaze, rescuers said.

In late October, a 10-month-old baby and his parents were killed when a bus collided head-on with their car near the Dead Sea. The victims were then named Kfir and Shira Avitan, both 28, from the northern town of Katzrin, and their daughter Gaia. 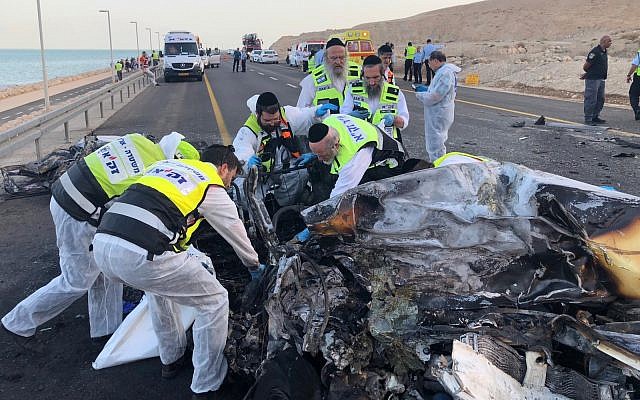 ZAKA rescuers at the scene of a fatal head-on collision on Route 90 near the Dead Sea on October 30, 2018 (ZAKA)