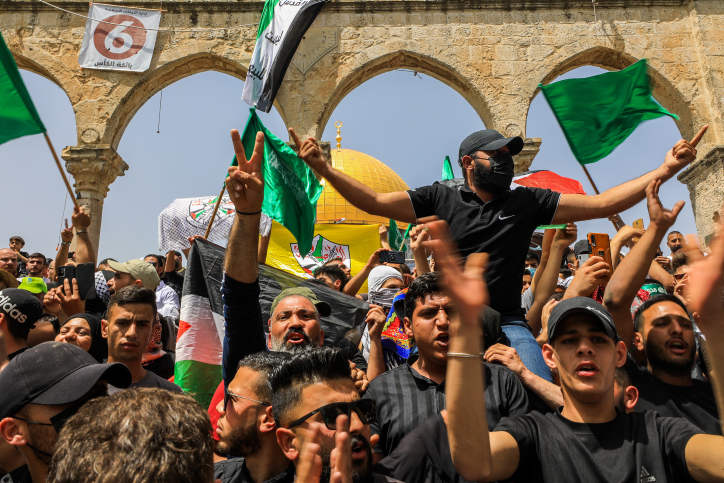 (May 31, 2022 / Israel Hayom) The Palestinian street is in turmoil over a video posted on social media showing an East Jerusalem resident being attacked and humiliated on the Temple Mount for allegedly “collaborating” with Israel. The man, a resident of Wadi Joz, belongs to a large and well-known clan. He was accused of submitting information, photos and videos regarding the events at the mosque to the Israeli authorities. He denied it, but his family members turned their backs on him, fearing reprisals.

Residents of East Jerusalem say the incident sparked widespread fear among the population.

“Today everyone pulls out their phone and takes pictures. That’s what the guy who was attacked did. In a situation like this, each of us could become a target. It causes fear. A person who films a video becomes a suspect, and now people are more afraid,” said an East Jerusalem resident.

It is feared that such attacks will not be limited to public humiliation and that those accused of cooperating with Israel will be executed.

“It creates panic, mainly among those suspected or accused of helping Israel. This incident shows that they are not protected. This happened in broad daylight, in a central location in Al-Aqsa, surrounded by [Israeli security] forces. People dared to attack it, film it and post it on social media. It projects the weakness of the Israeli authorities,” another resident said.

Over the years, Palestinians accused of collaborating with Israel have been the target of attacks of all kinds, including executions and attempted kidnappings. In East Jerusalem, residents say recent months have seen an increase in calls to attack suspected collaborators.

“It is expressed in sermons in mosques, in posters and sometimes even in graffiti. This incident made some people reluctant to attend prayers for fear of being targeted. You are there alone, surrounded by dozens of young people, and no one can save you,” says another resident.

Older residents remember that since 1967 hundreds of Palestinians suspected of working with Israel have been murdered in Judea and Samaria, some brutally.

“It shows how bold the young people of Jerusalem are. This guy is screwed – pictures of him being beaten and humiliated have been spread everywhere. Now the internet is filled with threats against potential collaborators, warning them of a similar fate,” an East Jerusalem official said.

With ever-widening geographic, political and social divides, high-quality reporting and informed analysis are more important than ever to keep people connected.

Our ability to cover the most important issues in Israel and the Jewish world – without the usual media bias – depends on the support of engaged readers.

If you appreciate the value of our news service and recognize how JNS stands out from the competition, please click on the link and make a one-time or monthly contribution.

We appreciate your support.