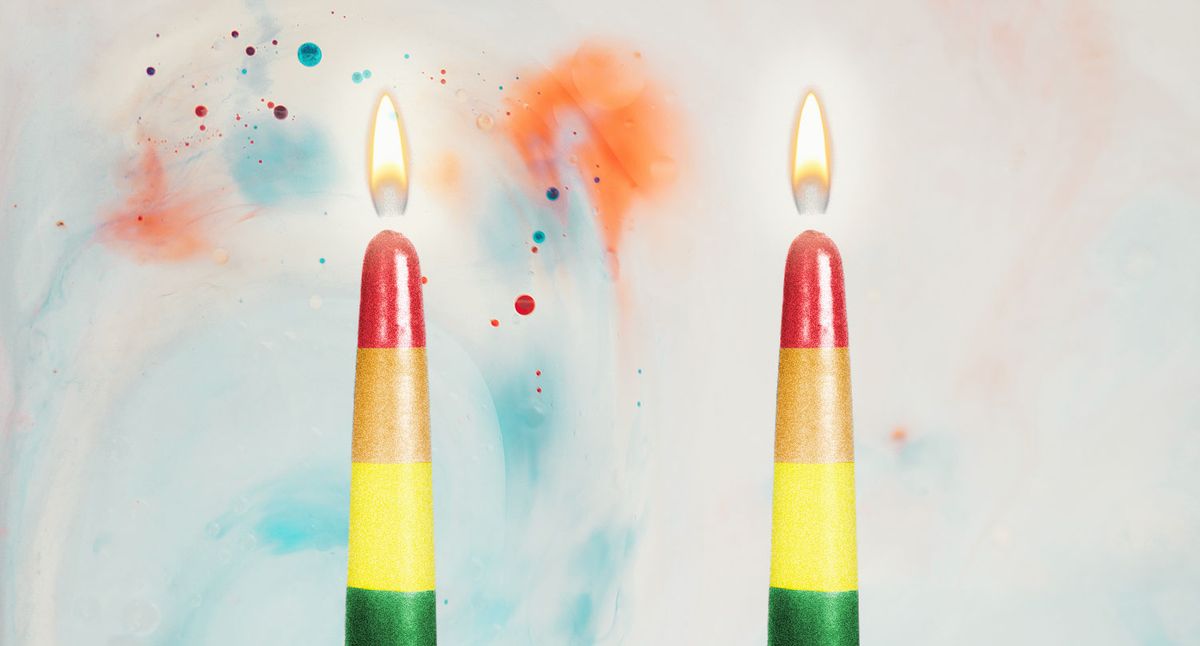 Nicole Kaufman Grubner was not publicly known as a lesbian in her hometown of Vancouver, but after making aliyah in 2013 she began to share her identity more widely. She started looking for a community in Israel where she could meet other people like her.

She was thrilled to find Shabbat Shelach, a group that aims to create a community for lesbian, bisexual and transgender women around the Shabbat table.

Shabbat Shelach was founded in 2016 by two Americans, Sarah Weil and Ariel Hendelman. “We had nowhere to go,” Weil said. “The religious Jewish world accepted our Judaism but rejected us as homosexuals. And the gay world accepted our homosexuality but rejected our Jewish values. We were stuck between worlds and so we created a new space, where we could live authentic Jewish lives as gay women. For me, Shabbat Shelach has become my supportive community for living a Torah- and God-centered life and building a true future as a gay Jewish woman.

At least once a month, the group organizes Shabbat potlucks in Jerusalem in private homes, which are attended by Jewish women from across the country. On average, about 10 women attend each Shabbat meal, but if the host has capacity, it can be larger.

When the group was founded, it occupied a niche space.

“There are many LGBTQI+ groups that focus exclusively on queer identity, and often people with religious identities have to choose one identity over another,” said Kaufman Grubner, who has been a member since 2016. “Shabbat Shelach was founded to say we want to have both sides of our identities and that’s why the organization is centered around the Shabbat table.

The group differs from other lesbian support groups in Israel, such as Bat Kol, because most members of Shabbat Shelach are English-speaking. olim who come from religious or spiritual backgrounds. Although the group does not specifically identify as Orthodox, many of its members, including Kaufman Grubner, come from observant or spiritually inclined homes and have an affinity and deep familiarity with religious practices.

“I wouldn’t say the group is orthodox. I would say we are religiously oriented,” Kaufman Grubner said. “We have members who live in all-ultra-Orthodox towns, who haven’t come out, and they come on Shabbat Shelach. We have atheist members who connect around Shabbat. All meals we prepare are kosher and food must be prepared in a kosher kitchen. We want everyone to feel this comfort.

From this simple premise, the group, which has nearly 200 members, has created a lesbian support community that many have been looking for. Its members include Americans, Canadians, Australians, New Zealanders and Europeans. A few Israelis have also joined their programs. Members’ ages range from early 20s to 60s.

We are proud of who we are, we are Jewish and queer. We are different. We are two minorities.

“Shabbat is really the epitome of this idea of ​​welcoming, coming together, sharing food, Torah and stories, opening our homes to each other,” Hendelman said. “During Shabbat, we discovered the secret of community. It fills me with joy and pride that now, seven years later, Shabbat Shelach is still going strong with a community of over 200 women and people who identify as women. It’s such a blessing and shows how much it was needed.

Because the group was originally formed for English speakers olim, he continues to meet this crowd in Israel. “If you can connect in English, come join us. It’s a welcoming group,” Kaufman Grubner said. “Even if your English is broken, we can find a way to communicate. We want everyone to feel welcome. We err on the side of inclusion.

Although the majority of members are lesbian, the group includes members who do not identify as lesbian but are gender non-binary or trans-female.

“We are aligned with women,” Kaufman Grubner said. “If you identify as female and were assigned female at birth, or if you are gay, you can attend.”

Prior to the COVID-19 pandemic, the group was growing around its programs and growing numbers of women excited to find their niche in the active LGBQTI+ scene in Israel. In addition to regular Shabbat meals, the group held a Passover Seder with a grant from the Schusterman Foundation and hosted a Shabbat dinner for the wider community at the Shalom Hartman Institute.

The pandemic has slowed its offerings, but the group continues to offer a range of programs to its members.

“There’s a need for that kind of connection and community, and I see it as part of my church service,” Kaufman Grubner said. “Having a space that is religiously Jewish and feeling no shame in participating in it as of right. It’s really important that we have these spaces available in Israel.

Among the members of Shabbat Shelach, there are women who have not yet come out with their families and friends in religious communities.

For Tova F., who asked that her last name not be used because she didn’t date her grandparents, Shabbat Shelach welcomed a community she hadn’t realized before she was doing. part. Growing up in New York City in a Modern Orthodox family, she went to an all-girls school, and growing up, she noted, “we definitely didn’t talk about LGBTQI rights in my house or my school.”

When she made aliyah from New York, Tova wanted to find a community: “In Israel, I was more open, in Israel, I experienced coming out. I realized that I needed people. I grew up without role models” in the LGBTQI+ community.

The first time Tova came to Shabbat Shelach, she felt she had found a place where she could truly belong.

“Seeing queer women sitting around a Shabbat table is my role model,” she said. “They show me what it will be like when I’m married and have a family. Among them are women who cover their hair and women who don’t. There are ex-Haredi women. is all the possible denominations.The common point is people who want to experience the Shabbat or experience the meal.

Shabbat Shelach attracts women who seek a familiar religious experience while being proud of their homosexuality, and it offers an unexpected side benefit for all participants: matchmaking.

In just over six years of operation, an estimated 10 couples have met on Shabbat Shelach.

Naavah Vesley, a 25-year-old woman who made aliyah from New York, met her partner, Jules, through the group. While these days the two and their baby live in Sydney, Australia, they owe their partnership to Shabbat Shelach.

“On Shabbat Shelach, we have a pretty good chidduch rate,” Vesley said, using the Yiddish term for matchmaking. “It’s one of the nicest communities I’ve ever been a part of. We are proud of who we are, we are Jewish and queer. We are different. We are two minorities.

Before joining Shabbat Shelach, Vesley was looking for a community she belonged to.

“Before moving to Israel [in 2018] I accepted the fact that I am a lesbian. A religious lesbian. I grew up in a closed Orthodox religious community in New York. I didn’t know what a lesbian was until I was 16,” she said. “I made friends at Shabbat Shelach that I never thought I would.”

Although she moved to Australia to be closer to her partner’s family now that they have a baby, Vesley is grateful for all the good times she had with the band. “Shabbat Shelach gave me a family when I didn’t feel like I had one,” she said. “It gave me meaning and meaning. Being able to give back to a community. A community that I felt was missing in New York for what I needed and it gave me confidence to be who I am .

In June, to celebrate Pride Month, the group hosts a Parsha and Pride Painting Night where participants will combine Torah study and self-introspection through art and painting.

“When we launched Shabbat Shelach, we were looking to fill a need, particularly among English-speaking LGBTQI+ women, for connection and community,” Kaufman Grubner said. “Today we have this community…but we also attend other people’s weddings, we get together for meals, we meet at the park to play basketball. Shabbat Shelach has created a space to meet friends, meet potential partners and connect around shared values.