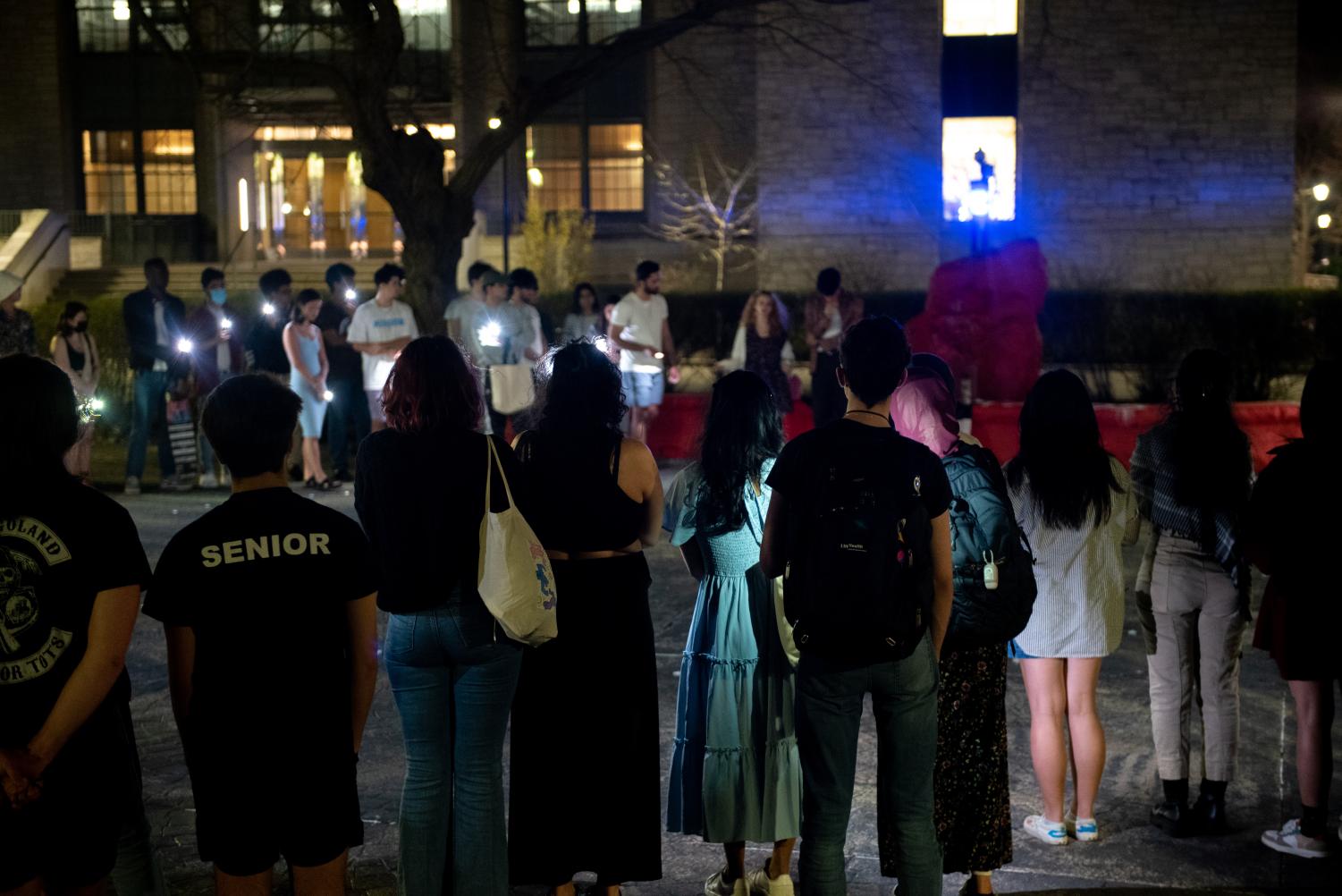 More than 70 community members gathered to honor Palestinian lives lost to violence by Israeli forces at The Rock on Saturday at a vigil organized by Students for Justice in Palestine.

On Friday morning, Israeli forces entered the Al-Aqsa Mosque compound in Jerusalem and injured around 30 Palestinians. The mosque has been the center of increased violence in recent weeks, which also coincided with the holy month of Ramadan.

A co-chair of the SJP, who asked to remain anonymous for security reasons, said the aim of Saturday’s vigil was to focus on those affected by the violence.

“A lot of people have very strong feelings about (the Israeli-Palestinian conflict), and it boils down to these concepts of ideologies or identity politics,” the SJP co-chair said. “It’s important to remember that these are people losing their lives.”

In recent weeks, at least 25 Palestinians, bystanders and fighters, have been killed. After an introductory speech by a SJP organizer, attendees gathered in a circle while another student read aloud the names of 17 lost Palestinians whose names have been found. Community members then turned on their phone flashlights and observed a minute of silence to honor the deceased.

An SJP organizer and junior Weinberg, who asked to remain anonymous for security reasons, said the recitation of names sought to “humanize” those who lost their lives. People often become desensitized to violence when trauma reports concentrate the number of people killed and injured, he said.

As a Palestinian, the organizer said he hoped the vigil would raise awareness in the entire university community about the violence.

“A lot of Palestinians are dying and their stories are getting lost,” Weinberg’s junior said. “We want to remember them and honor them as people and not just numbers, so they don’t get lost in the statistics.”

The program concluded with a reading of “In Jerusalem, I mean inside the old wall…” by Mahmoud Darwish and a prayer in Arabic, during which the participants joined hands.

After the vigil, SJP organizers stayed to paint The Rock with peace signs and the words “Free Palestine.”

Some organizers have also expressed frustration with Northwestern’s lack of response to the violence in Palestine. The University has not issued a statement on the dispute so far.

SJP organizer Tessneem Shahbandar noted that the University issued a statement days after Russia invaded Ukraine in solidarity with those affected.

“As far as Ukraine is concerned, they released a statement, which is great,” Shahbandar said. “This is another heinous violent crime, and there’s just complete silence from the University. I wish there was more of a welcome to talk about it and give it the attention it deserves.

Earlier this month, the SJP published an open letter drawing attention to the spike in violence in Jerusalem during Ramadan. The letter has since garnered more than 200 signatures. Ten student organizations also signed the letter, including the Association of Students of Muslim Culture, the Association of Students of the MENA Region and NU Dissenters, an anti-war student group.

“The North West administration cannot choose which violent world events are worth knowing about, because in doing so it picks and chooses which human lives matter most,” the letter reads. “During this period of spiritual reflection, never has the violence in Palestine been so poignant and yet so silenced.”

“There’s so much propaganda in America that makes (the conflict) so murky and seems like such a complicated issue,” the co-chairman said. “Being anti-Israeli has nothing to do with anti-Semitism.”

In addition to issuing a statement, the co-chair said SJP hopes NU will take concrete action by stopping the sale of Sabra products on campus. Strauss Group, the parent company of Sabra, financially supports some brigades of the Israel Defense Forces. SJP protested Sabra’s presence since February, and several members have said that the University’s continued sale of Sabra makes it complacent in genocide.

SJP’s broader goal is to get the board to divest from arms manufacturers, the co-chairman said. Campus groups like NU Dissenters have also condemned NU board members for having financial ties to militarism.

“Despite Palestine, (weapons divestment) is an intersectional struggle,” the co-chair said. “We support black liberation. We are against all kinds of wars, Somalia, Yemen, things that the board benefits from.