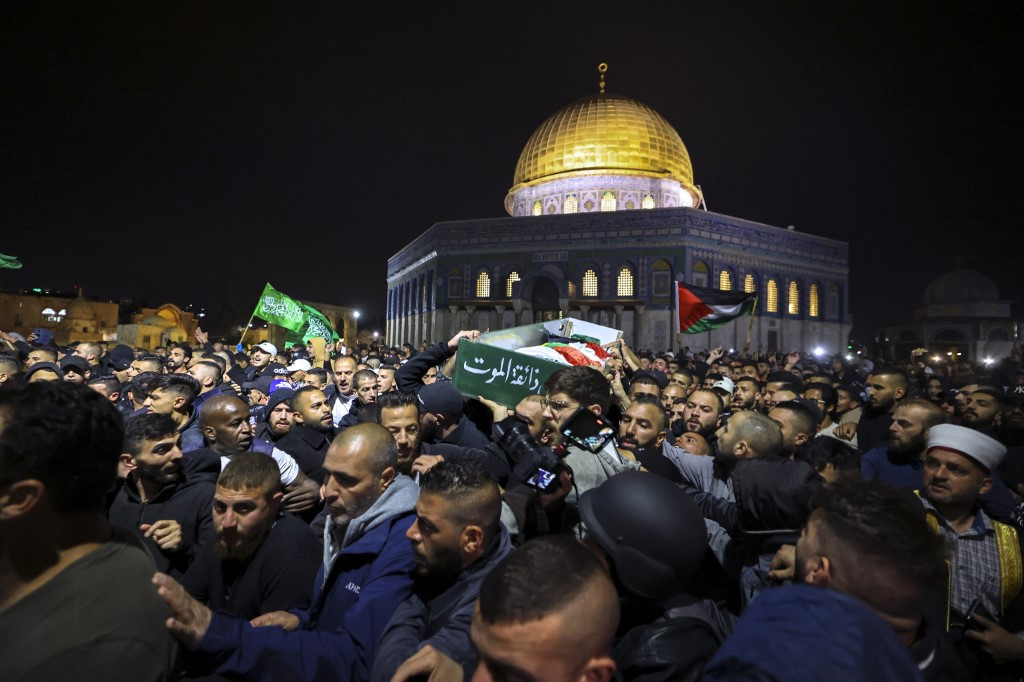 More than 70 Palestinians were injured in overnight clashes with Israeli forces at a funeral in Jerusalem, Palestinian medics said on Tuesday, in unrest that police said included “violent riots” that threatened the officers’ lives.

The unrest unfolded as Palestinians buried 23-year-old Walid al-Sharif, who died on Saturday from injuries sustained in clashes last month at the Al-Aqsa Mosque compound, a hotspot in Jerusalem.

The Palestinian Red Crescent Society says the injuries occurred ‘during clashes with occupation forces’, with Israeli police firing rubber bullets and stun grenades, in and around the annexed Old City of East Jerusalem by Israel.

Sharif’s body was carried by mourners through the Al-Aqsa compound and brought through Herod’s Gate in the Old City, before being buried in a nearby cemetery.

Police said “violent disturbances occurred during and after the funeral, including in the cemetery itself.” Six officers were injured.

“Israeli forces acted resolutely against hundreds of violent violators and rioters who … took violent action against the forces, putting their lives at risk,” a police statement said.

The Palestinians were “throwing rocks, bottles, bricks and other heavy objects, and firing fireworks at the forces”, he added.

The Palestinian Prisoners Club advocacy group said more than 50 people had been arrested.

Police put the number of arrests at 15.

The clashes erupted days after police raided the funeral procession of veteran Al Jazeera journalist Shireen Abu Akleh, who was shot dead in an Israeli army raid in the West Bank.

Palestinians and the TV station said Israeli troops killed her, while Israel said Palestinian fire may be to blame.

Anger over his death was heightened on Friday when baton-wielding Israeli police in annexed East Jerusalem beat pallbearers carrying Abu Akleh’s coffin which was draped in a Palestinian flag.

Israel Police said they would investigate the raid by officers on the funeral procession as Abu Akleh’s body was being taken from St. Joseph’s, a Catholic hospital in East Jerusalem.

The chaotic incident was strongly condemned around the world, including by the United States, the European Union, the United Nations and the Vatican.