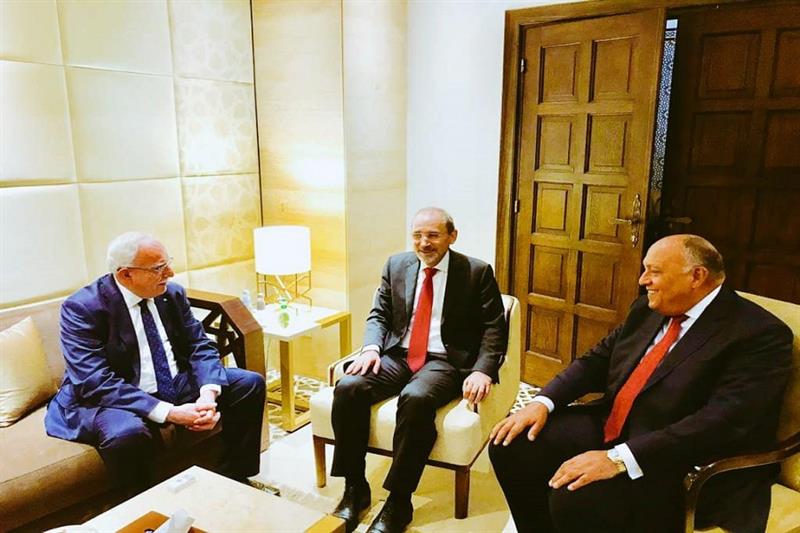 Ministers of Egyptian, Jordanian and Palestinian Foreign Affairs meet on the sidelines of the 157th ordinary session of the Council of the Arab League. (Courtesy of the Ministry of Foreign Affairs)

The three foreign ministers stressed the importance of launching serious negotiations between Palestine and Israel in an effort to achieve a comprehensive, just and lasting peace that guarantees the establishment of an independent Palestinian state on the 1967 borders with East Jerusalem as the capital, Hafez is noted.

The three ministers also expressed their aspiration that the parties concerned actively engage in the peace process and work to resolve all that jeopardizes the chances of achieving a two-state solution and establishing peace in the region. .

Shoukry affirmed Egypt’s continued support for Palestine at various levels, and agreed to continue coordination and consultation with all parties concerned during the coming period, according to the statement.

This preceded the opening of the 157th Ordinary Session of the Arab League Council, chaired by the Lebanese Foreign Minister, where Arab Foreign Ministers called on the international community to relaunch the peace process in accordance with relevant international benchmarks. and the Arab Peace Initiative. .

Prior to the session, the Ministerial Committee of Arab Foreign Ministers organized a consultative meeting to set the agenda for the 157th meeting of the council. High on the agenda were the latest developments in the Palestinian-Israeli conflict, Turkish interference in the internal affairs of Arab countries and Arab water security.

In his speech at the session, Lebanese Minister of Foreign Affairs and Emigrants Abdallah Bou Habib called for revitalizing existing mechanisms for the implementation of UN Security Council resolutions regarding the Palestinian cause, reported MENA.

Egypt and Jordan are in talks with regional and international parties to relaunch the long-frozen talks between the Palestinian and Israeli sides in accordance with international resolutions, the Arab Peace Initiative and the two-state solution with the aim to establish an independent Palestine on the 1967 border, with East Jerusalem as its capital.

Bou Habib noted that the conflict in Ukraine has imposed itself on the world, especially since the world has not yet recovered from the coronavirus pandemic.

During the session, which took place at the request of Egypt in February, Bou Habib said that the repercussions of the Ukrainian crisis will have a strong impact on the world, especially on the Arab region.

On this point, the Lebanese Foreign Minister called for speeding up the steps to formulate a unified Arab position that suits Arab countries to face these challenges.

JoJo’s Bizarre Adventure: All Star Battle gets a facelift