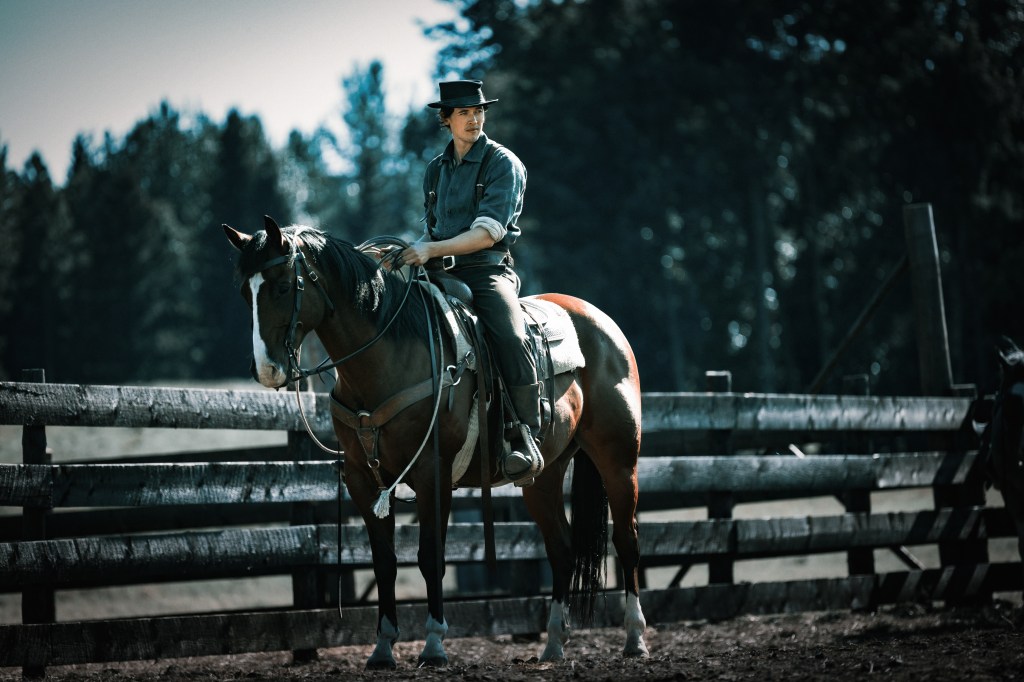 Epix has announced that its upcoming adventure series “Billy the Kid” will premiere on April 24.

The series follows notorious outlaw William H. Bonney, aka Billy the Kid (Tom Blyth), from his Irish roots to his days as a cowboy on the American frontier, including his role in the County War of Lincoln.

The news came via Epix’s presentation at the Television Critics Association’s Winter 2022 press tour, during which they also released a new trailer.

“I’m incredibly proud of the premium programming Epix continues to produce,” Wright said. “‘Women Who Rock’, ‘The Amityville Murders’ and the second season of ‘NFL Icons’ follow in the footsteps of acclaimed docuseries like ‘Laurel Canyon’, ‘Punk’ and ‘Mr. A and Mr. M: The History of A&M Records,” and they exemplify our brand promise to create prestigious and thought-provoking programming with the best storytellers in the industry.

“Chapelwaite” is based on Stephen King’s short story “Jerusalem’s Lot”. Season 1 premiered in 2021, and the new season will reveal that the curse of the Boone family has not died with Jakub (Christopher Heyerdahl) and that De Vermis Mysteriis remains as powerful as ever. The series is produced by Donald De Line, Jason Filardi and Peter Filardi. Epix Studios produces.

Season 1 of “Domina” premiered in 2021 and chronicled the struggle for control of the Roman Empire following Caesar’s death from a female perspective. Season 2 will follow The Prominent Claudii’s Livia Drusilla as she fights to preserve her marriage to Caesar Augustus and find a way to seat one of her sons on the throne. Simon Burke serves as creator and executive producer with Lucy Bedford, Muirinn Lane Kelly and Carmel Morgan. Tiger Aspect Productions produces in association with Epix Studios. Epix owns the US rights and Banijay Rights is the worldwide distributor.

“Hotel Cocaine” tells the story of Roman Compte, the Cuban exile, CIA agent and general manager of the Mutiny hotel. The hotel was the epicenter of Miami’s cocaine scene in the late 70s and early 80s and was frequented by Florida businessmen and politicians, international narcos, police agents CIA and FBI, models, sports stars and musicians. Epix Studios is expanding, with Chris Brancato attached as writer and executive producer.

“Black Harvest” is a noir series set in 1952 Paris, where a popular black American author and his talented but unheard-of girlfriend arrive to attend the Pan-African Conference but find themselves in the midst of a series of kidnappings and murders. of black men. What at first appears to be casualties of the drug-infused underground jazz scene ends up becoming part of something much larger with potentially global consequences. Epix Studios expands, with executive production by Carl Franklin and Ben Donald.

“American Classic” is a half-hour comedy that follows narcissistic Broadway star Richard Bean (Kevin Kline) after he suffers a public meltdown and returns to his small hometown and the family theater where he began performing. . Upon arrival, he discovers that his father, the former artistic director, has descended into puppet dementia and that the once-respected theater run by his brother (Jon Tenney) and his wife (now the town’s mayor) is become a low-cost dinner show. Michael Hoffman, Bob Martin, Leslie Urdang, Kevin Kline, Anthony Bregman and Miriam Mintz are attached as executive producers. Epix Studios and Anonymous Content’s AC Studios are co-producing.

Returning for Season 3, “Condor” follows Joe Turner (Max Irons), an overseas CIA officer who became a foot soldier in the Agency’s Cold War against China for the Earth’s substantial natural resources. ‘Africa. But when conflict erupts in his little corner of the continent, Joe must stop the proxy war from turning into World War III, even at the cost of what’s left of his soul. “Condor” Season 2 was produced by Jason Smilovic, Todd Katzberg, Andrew McCarthy, David Ellison, Dana Goldberg, Bill Bost, Shane Elrod, Brian Walsh, John Weber and Frank Siracusa. The series is a co-production of MGM Television and Skydance Television, in association with Paramount Television.

“Tails of a London Dog-Walker” is a half-hour comedy-drama based on Kate MacDougall’s memoir “London’s Number One Dog Walking Agency,” following Kate through her work and love life. Ella Greenhill, Emma Frost, Matthew Graham and Anne Thomopoulos will serve as executive producers, with MacDougall serving as associate producer. Frost and Graham’s Watford & Essex will produce in association with Epix Studios.

In four parts, “Sessions” will tell the stories of different artists from their own perspective, using their music, behind-the-scenes footage, interviews and archival material to document their careers. Sutter Road Picture Company, in association with The Kennedy/Marshall Company, is joined as a production company. Frank Marshall, Guss Wenner, Jason Fine and Alison Ellwood serve as executive producers. Alison Elwood is directing.

“Hollywood Black,” based on the book of the same name by historian Donald Bogle, will tell the stories of the actors, writers, directors and producers who have defined Hollywood’s black history. Justin Simien, Forest Whitaker and Nina Yang Bongiovi serve as executive producers. Bogle serves as consulting producer. Jesse Collins Entertainment is joined as a production company.

“San Francisco Sounds” is a two-part series about the San Francisco music scene from 1966 to 1976, focusing on the Bay Area’s psychedelic and protest movements. Framed by four of the most defining musical events in history, Monterey Pop, Altamont, Woodstock and The Last Waltz, the series is expected to include artists such as The Grateful Dead, Jefferson Airplane, Sly and the Family Stone, Janis Joplin with Big Brother and holding company, Santana, Moby Grape, Creedence Clearwater Revival, Jimi Hendrix, Otis Redding and Steve Miller. Frank Marshall, Jeff Pollack, Alex Gibney, Darryl Frank, Justin Falvey and director Alison Ellwood serve as executive producers. Jigsaw Productions produces in association with Amblin Television and The Kennedy/Marshall Company.