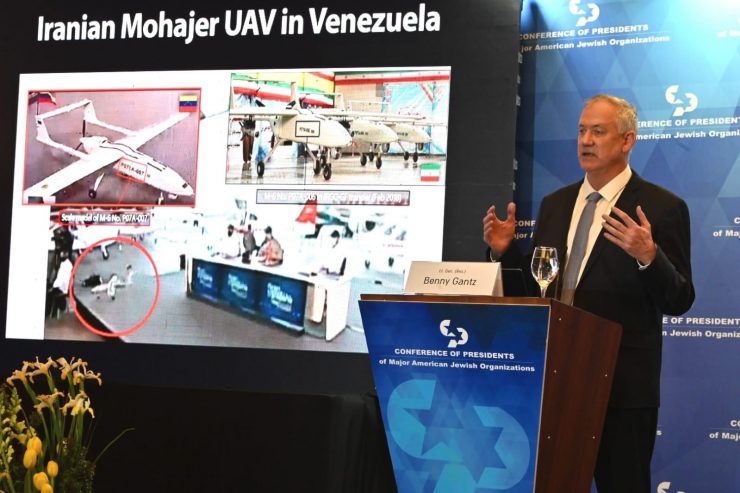 Regarding the negotiations in Vienna on the relaunch of a nuclear agreement with Iran, Gantz underlined that “a nuclear agreement, if signed with Iran, does not mark the end of the road. This opens the door to important steps that need to be taken. This includes monitoring open files. It also means stopping the development of ballistic missiles capable of carrying nuclear warheads.

“We don’t have to get to that point down the road anymore – and that means dealing with the sunset clause. Enforcement and supervision by the IAEA are crucial but not sufficient. We need to have offensive capabilities and a set of sanctions ready in our back pockets in case Iran violates the deal,” he said.

Since signing the first nuclear deal in 2015, Iran has increased its security budget by 50%, Gantz noted. “We have to deal with the Iranian aggression and the support of the proxies and ensure that their so-called security budget is not increased and the money is not poured into terrorism,” he said. warned.

Pointing to an image of a Mojaher-type UAV, Gantz said he “brought with me just one image – it really is worth a thousand words. This image shows a model of Iran’s advanced Mohajer drone, presented by the Venezuelan president.

“In addition to developing Iranian drones in Venezuela, our assessments show that Iranian PGMs (precision-guided missiles) are being delivered for these drones and other similar models. With this image in mind, I can tell you that during my meetings with partners around the world, including African and Latin American partners, I have heard extreme concerns about Iranian support for terrorism. Iran is truly a global and regional challenge and not just a threat to the world. State of Israel,” he stressed.

The Qods Mohajer (“Immigrant”) is an Iranian single-engine tactical UAV built by the Qods Aviation Industry Company in four main variants beginning in 1984. The Mohajer family is primarily used for reconnaissance and is among the best-known Iranian UAVs.

It was exported to Iran’s proxies in the Middle East and was used in the Syrian and Iraqi civil wars. Iran has reportedly sold eight Mohajer-4s to Hezbollah. Additionally, the Mohajer-2 is built under license in Venezuela under the name Arpia.

Iranian drones are also now active in African states and Venezuela, just 2,000 kilometers from Florida and within range of their attacks.

Incidents of the past months and years have provided insight into the devastating ways drones can be used in modern warfare to target strategic sites. They have been used to strike airports and oilfields in Saudi Arabia, both by the Houthis and directly by Iran, used against US forces in Iraq and Syria by Shiite militias, and used by Iran to hit merchant ships linked to Israeli businessmen.

The increasing use of UAV swarms, massive attacks by multiple units simultaneously, is also an indication of the future of this weapon system.

In Israel and around the world, awareness of the strategic threat posed by drones is growing. , such as ballistic missiles or aircraft, can travel thousands of kilometres.

The US Treasury Department has described the expansion of the drone army in the region “as a threat to peace and destabilizing international stability”.

Gantz revealed in November that Iran was carrying out attacks using suicide drones launched from its territory and from the countries in which its proxies are deployed, and presented the two main bases in the Shabhar region and the Qeshm Island in southern Iran, from which operations are carried out against maritime targets and where advanced attack drones are still located today.

Focusing on Israel, the Defense Minister revealed that “in February 2018, Iran launched an m-Shahed 141 drone from T4 airport in Syria, which was carrying TNT explosives. The drone was intercepted near Beit She’an and its destination was, to our knowledge, terrorist elements in Judea and Samaria. Iran not only uses unmanned aerial vehicles to attack, but also to effect arms transfers to its proxies.

Elias: Finally, someone is slowing down the development of the wild lands

We are all capable of achieving greatness