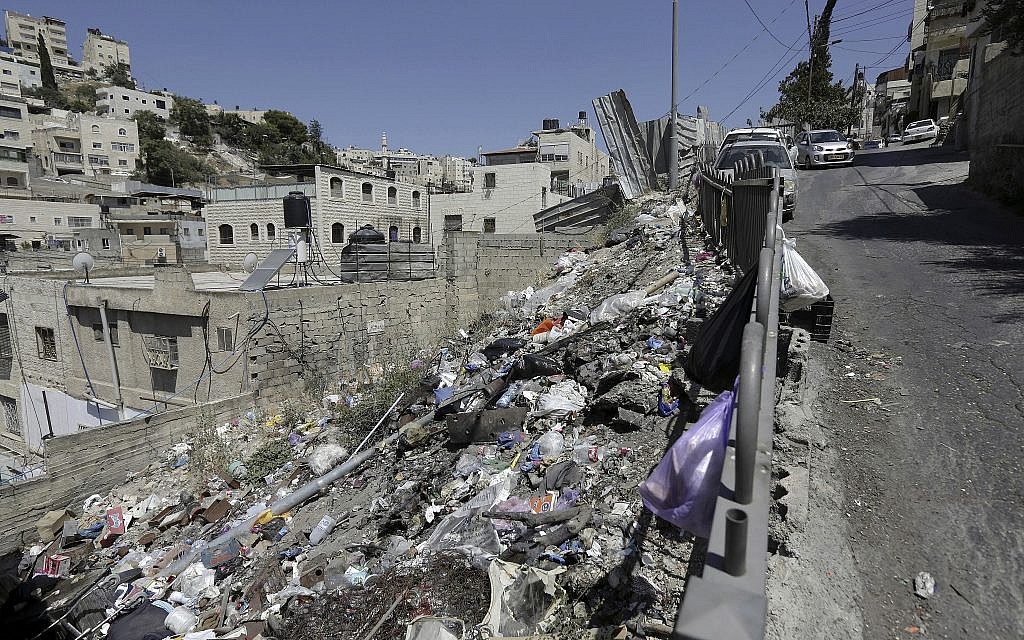 AP – A historic half-billion-dollar Israeli plan to develop the Palestinian areas of East Jerusalem and lift people out of poverty is receiving a cold reception from the very people who are supposed to benefit from it.

Israel says it hopes the program will improve living conditions in impoverished Palestinian neighborhoods and allow residents to access Israel’s strong economy. But the city’s long-neglected Palestinian community views the project with deep skepticism and mistrust, fearing it is a way to cement Israel’s control over the eastern sector.

“All of these projects have nothing to do with improving our lives,” said Ziad Hammoury, who heads the Jerusalem Center for Social and Economic Rights, an advocacy group. â€œIt’s about controlling East Jerusalem more and more.

The program will invest NIS 2 billion, or $ 560 million, in education, infrastructure and helping Palestinian women enter the workforce. The money will be spent on a variety of programs, including nine pilot projects, over five years with the aim of attracting further government and private investment down the road.

The program was instituted by the Israeli nationalist government. He opposes any division of the city but seems to have concluded that strengthening the Palestinian areas of Jerusalem is also in Israel’s interest.

“All those who truly believe in a united Jerusalem and aspire to full sovereignty must act with determination to govern on the one hand and take responsibility for infrastructure development on the other,” said Ze’ev Elkin, Minister of Affairs. of Jerusalem from the government, at the launch of the project in May. Elkin’s ministry is expected to play a leading role in implementing the program, and he is running for mayor of Jerusalem in this year’s election.

The designers of the program say they recognize political sensitivities, but argue that the economic benefits will be real. They say that integrating Palestinians more into Israeli society will provide more opportunities.

â€œIt is a population like any other. He deserves to receive public services like everyone else, â€said Shaul Meridor, head of the budget department of the Ministry of Finance. â€œEconomically, it’s just very clear to everyone that if we help this population to be fitter, they will benefit and everyone will benefit too. “ 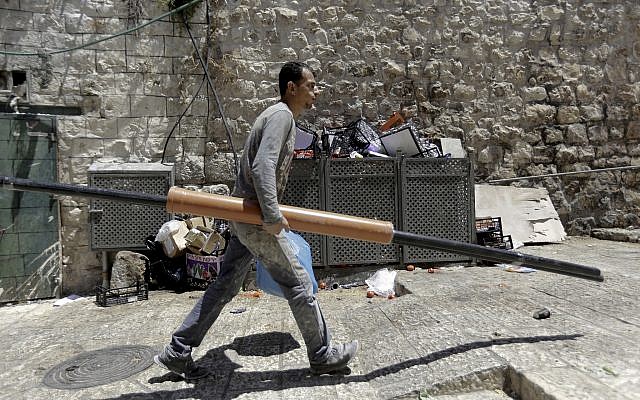 In this July 11, 2018 photo, a worker walks through the Muslim Quarter of Jerusalem’s Old City. (AP Photo / Mahmoud Illean)

Israel took control of East Jerusalem during the Six Day War in 1967 and annexed it in a move that is not internationally recognized. Israel views East Jerusalem as an indivisible part of its capital, while Palestinians seek the region, home to the city’s most sensitive holy sites, as the capital of a future state.

Since 1967, Palestinian residents of East Jerusalem have been eligible for Israeli citizenship but most have not applied for it, believing it would mean acknowledging Israeli rule.

Instead, they have resident status, allowing them to work and travel freely in Israel. As non-citizens, they do not vote in Israeli elections. Few of them use their right of residence to vote in municipal elections, a political statement that denies them a way to influence their daily lives.

Palestinians make up 37% of Jerusalem’s population of 866,000. Despite Israel’s representation of Jerusalem as united, there are marked differences between the city’s Arab and Jewish quarters. 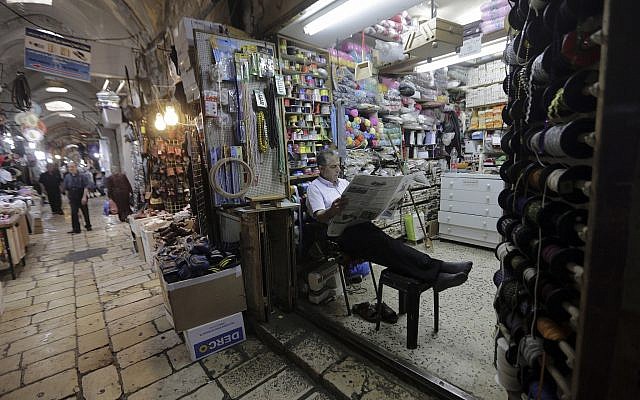 In this July 11, 2018 photo, a shopkeeper waits for customers in the Muslim Quarter of Jerusalem’s Old City. (AP Photo / Mahmoud Illean)

The winding pedestrian streets and cycle paths of West Jerusalem contrast starkly with the trash-strewn and pothole-strewn streets of East Jerusalem. Many Palestinians work in menial jobs in the western part, where wages are higher and work more abundant. A ring of Jewish quarters that Israel has built across East Jerusalem enjoys the same infrastructure and development as the west side.

One aspect of the new project is to encourage learning of the Hebrew language and promote adoption of the Israeli school curriculum as opposed to the Palestinian curriculum, according to organizers, with measures aimed at opening the doors to the Israeli economy. They say the project will also address land use issues, erect shopping centers and increase access to public services.

Lior Schillat, director general of the Jerusalem Institute for Policy Research, called the program “historic,” saying it was the first time that an Israeli government has invested so much in the region’s economic development.

In 2014, the government set aside a special budget of 200 million shekels ($ 55 million) for the region, a fraction of the current project.

The city spends 9-11% of its budget on Palestinian neighborhoods, which is not proportional to their population, said Meir Margalit, a former member of the Jerusalem city council. A spokeswoman for the municipality said the city has made “unprecedented” investments in East Jerusalem in recent years. 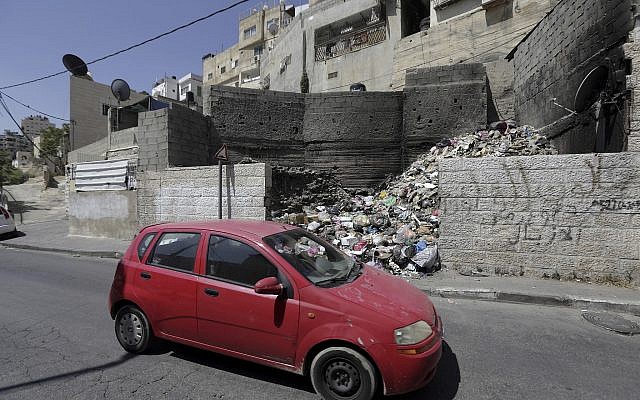 In this July 12, 2018 photo, garbage is piled up in a Palestinian neighborhood in East Jerusalem. (AP Photo / Mahmoud Illean)

Organizers say they expect to see dramatic changes in the new program within a few years.

Schillat said there are indications that more Palestinians are looking to Israel for economic opportunities rather than the West Bank or the wider Middle East. He said that more people enroll in Israeli universities and colleges, more apply for citizenship, and half of all employed East Jerusalem Palestinians work in West Jerusalem or surrounding Jewish towns. He said mistrust could be eased once the change is seen on the ground.

Mohammad Owaida, an East Jerusalem resident, advisor to the Jerusalem Ministry of Affairs and participant in the project, said he was not concerned about the government’s intentions as long as the project brought about changes.

â€œI don’t care about (Elkin’s) agenda. I care about improving the lives of 400,000 people, â€he said, adding that he thought most people agreed with him but were too scared to speak up.

Others say it is flawed because its design did not include a leading role for the residents of East Jerusalem – few of whom hold government positions – although organizers say they frequently consulted with them. residents. The festive launch of the project, held at the residence of the Israeli president, included a number of Israeli dignitaries, but few Palestinian faces.

â€œIt’s a big project but it came too late and didn’t include local representatives,â€ said Ramadan Dabash, one of the few Palestinians to run for Jerusalem city council. â€œWho knows East Jerusalem like those who live here? “

Critics also say they have seen past Israeli attempts to meet the needs of Palestinians in the city falter.

â€œThese are attempts to essentially induce the Palestinian population to renounce or dilute their national identity as Palestinians and become Israeli,â€ said Daniel Seidemann, a Jerusalem expert who is very critical of government policies.

His solution to the problems of East Jerusalem?