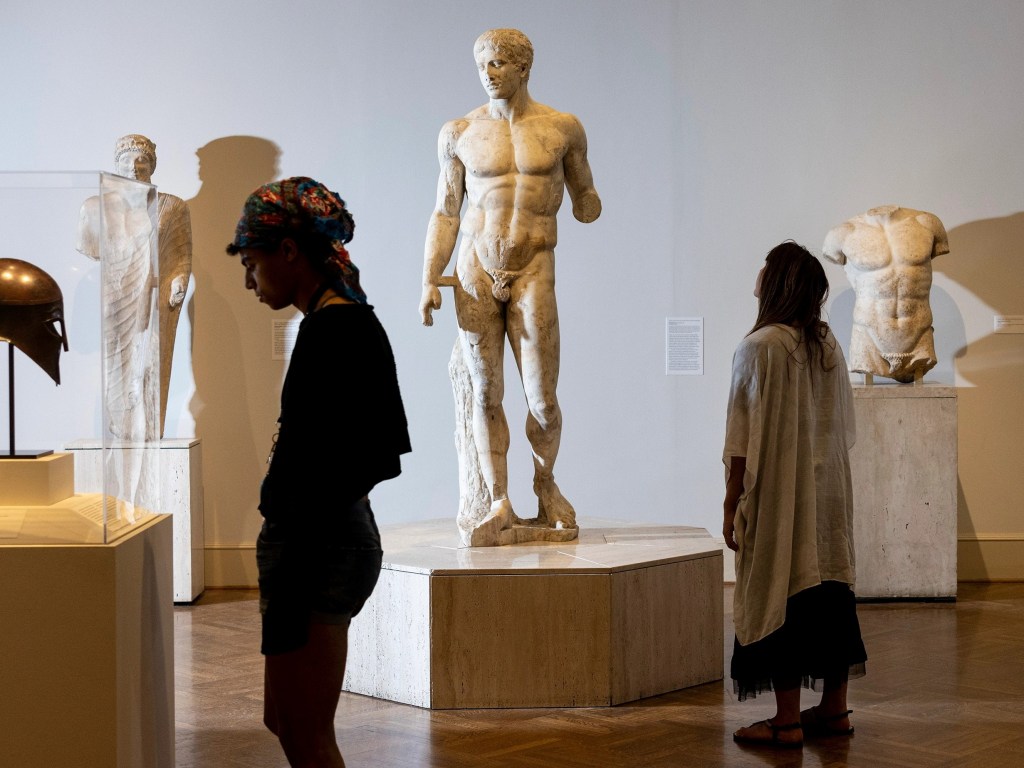 TORRE ANNUNZIATA, Italy – The story has long been that a shipwreck in the ancient past sent a precious Roman marble statue – a rare copy of a depiction of the “Doryphoros” or fifth-century BC spear-bearer – into the depths of the seas off Italy.

That was the account given in the late 1970s when the statue materialized out of the blue at Munich’s Glyptothek, the city’s museum dedicated to ancient Roman and Greek art. A dealer had lent it to the museum in anticipation of a possible sale, and the story he then told was of a statue that had been rescued from the ravages of seawater and kept in a private collection, where for decades it escaped notice.

And that’s the narrative endorsed by Minneapolis Institute of Art officials when they purchased the statue for $2.5 million in 1986 and installed it as a signature artifact in a showcase gallery.

But now Italian authorities are pushing the museum to return the work, claiming it was in fact illegally excavated from a site near Pompeii in the 1970s.

Additionally, according to prosecutors, there is evidence that even before purchasing the statue, Minneapolis museum officials knew there were reservations about the origin story, but moved forward anyway.

“They certainly had their doubts,” said Nunzio Fragliasso, chief prosecutor of Torre Annunziata, a town south of Naples, Italy, where investigators have been reviewing correspondence between Minnesota museum staff from the time of procurement.

In January, an Italian judge, working on evidence presented to him by prosecutors, ruled that the museum should return the statue on the grounds that it had been illegally excavated and exported from Italy.

The Minneapolis Institute of Art said in a statement that it had not been officially notified of the Italian court’s decision and that it had “still conducted research on the acquisitions, including seeking comment from outside scholars “.

The object of all this attention is one of the rare old copies of a revered original by the Greek artist Polykleitos, which has long been considered one of the most important works of classical antiquity, celebrated as a example of a perfectly proportioned body (detailed by the sculptor in “Le Canon”, treatise accompanying the statue). Among the extant copies, that of Minneapolis, believed to have been created between 27 BC and 68 AD, is considered one of the best preserved.

The statue had been offered for sale at the Munich museum when it was on loan there. At the time, the statue was labeled “Doryphoros aus Stabiae”, a reference to the ancient city on the Gulf of Naples which presumably identified itself as its original home. The piece was handled by Elie Borowski, an antiquities dealer and collector who later founded the Bible Lands Museum in Jerusalem and died in 2003.

As the German museum raised funds to purchase the piece, Italian media pored over its provenance. In 1980, the national television channel RAI broadcast a report suggesting that the statue had been dug up in 1975 or 1976 while construction work was underway in an area of ​​what is now Castellammare di Stabia. The report included four photographs, believed to have been taken shortly after the statue was discovered, which, compared to the statue – down to the broken and missing parts, including part of a foot – appeared to match.

In 1986, the Minneapolis Institute of Art purchased the statue, and its then-chief curator repeated Borowski’s account, who said the statue had been in private hands since the 1930s, when it was found at sea, off the coast of Italy.

Over the years, the question of the origins of the statue has resurfaced. Archaeologist Mario Pagano said in an interview that he raised the issue of provenance with officials from the Italian Ministry of Culture around 2001, when he was director of the Stabiae site, part of the ancient city also buried by Vesuvius in 79 AD.

Italian officials organized an investigation at that time, but they never made a formal request for restitution to the Minneapolis museum.

Eike Schmidt, director of the Uffizi Gallery in Florence, Italy, was a senior curator at the Minneapolis museum at a time, from 2009 to 2015, when the statue had already become an integral part of the collection. Schmidt said in an interview that he was told that museum officials had been contacted by Italian police about the statue a few years before his tenure there.

“The museum said, ‘Oh, yes, please come here. Let’s see what we have. Let’s watch it together,” Schmidt recalled in an interview. But months passed, letters went back and forth, and in the end no one showed up, he said.

Schmidt said the museum’s policy on provenance disputes must be forthcoming, citing a medieval silver reliquary he returned after learning it had been stolen. The museum was also one of many to comply with an Italian campaign in recent decades to recover artefacts, returning an Attic red-figure vase it acquired in 1983.

Schmidt said that during his time at the museum he had been in contact with Italian officials and scholars as part of his work, and questions about the statue’s past never arose.

But around three years ago, the statue again fell into the crosshairs of Italian investigators as they pursued an unrelated examination of frescoes Borowski had manipulated. Investigators unearthed a large file on the Colorado beetles that dated back to the 1980s and had grown over the decades.

“In reviving the old investigation, we came across lengthy correspondence between Minneapolis museum staffers,” Fragliasso said, “not only about their fundraising efforts, but also about verifying the legitimacy of the provenance of the statue”.

At the very least, he said, Minneapolis museum officials were aware of the statue’s murky origins, including claims that it had been illegally excavated and that the Italians had demanded the statue’s return. from Munich in 1984.

In an undated letter on file, he said, museum employees speak of the opinion of three archaeologists who express doubts that the antiquity was found in the sea and call it “hot “.

In a separate memo, museum staff raised concerns about Borowski’s account, noting that it would have been difficult for such a remarkable sculpture to remain undetected in a private collection for decades, prosecutors said.

Michael Conforti, who was chief curator at the Minneapolis museum at the time of the purchase, asked the museum questions. But Conforti, who is director emeritus of the Clark Art Institute in Williamstown, Mass., said in an email that he recalled the museum relying on the findings of the German court case over the early-19th-century statue. 1980s. The court, he said, had “found that there was no evidence of discovery as once claimed” and that was “the factor that allowed us to make the purchase at the time”.

Italian officials say that although the German court declined to order the statue’s return to Italy, it did not rule on the merits of the case.

Gabriel Zuchtriegel, director of the Pompeii archaeological site, said experts had other reasons to doubt Borowski’s account, primarily the condition of the statue itself.

“The statue shows no signs of having been under salt sea water for a long time,” he said, citing the impact such corrosives would have had on the marble. “It comes from the earth.”

Last year, Fragliasso presented his case to the judge of Torre Annunziata, who issued a decision calling for the confiscation of the statue. In February, Fragliasso formally requested that U.S. judicial authorities help him enforce the judge’s order. But he is still processing documents that US officials will use to assess his claim.

Declining to comment, the Minneapolis museum acknowledged in an emailed statement that it had seen the news reports regarding the court’s decision. The museum, also known as MIA, said it would be premature to discuss the concerns raised by Italian prosecutors.

“Regardless of what information may have been shared with you,” the statement said, “Mia has not been contacted by Italian authorities in connection with the court’s decision. If the museum is contacted, we will review the matter and respond.” Consequently.

Should the statue be returned, authorities plan to put it on display at the Libero D’Orsi Museum in Castellammare di Stabia, a new museum to open in 2020 that features works taken from villas in the ancient city, including frescoes that had been illegally excavated in the 1970s and later recovered by Italian police from art thefts.

Although the case is being pursued by local prosecutors, Italian officials at the national level have also shown renewed interest in the return.

“I think there is excellent evidence that the statue was from Castellammare and that it was illegally exported,” said Massimo Osanna, an archaeologist and Culture Ministry official responsible for state museums.