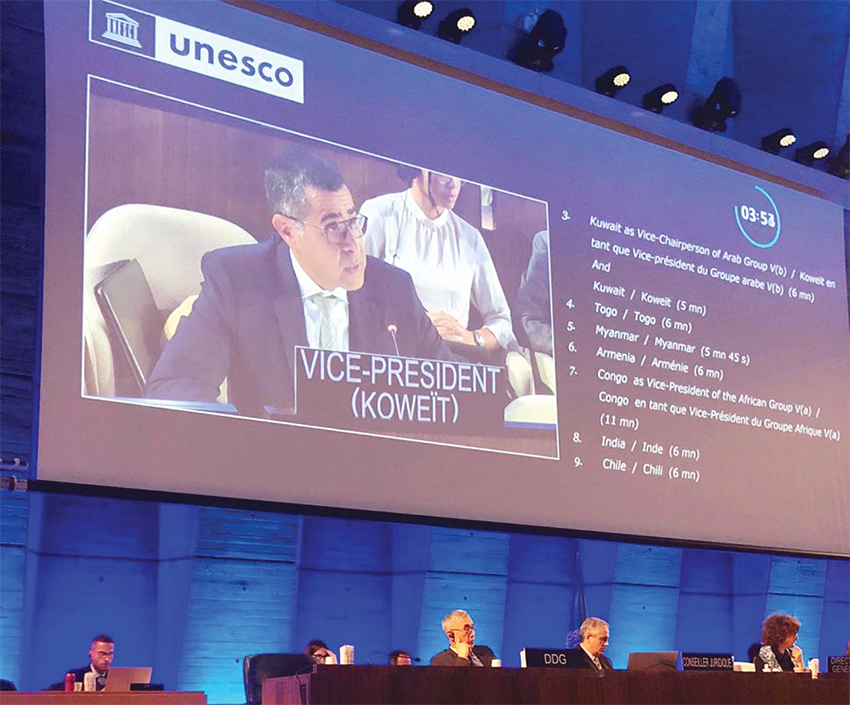 PARIS, October 11: The State of Kuwait underlined on Monday that it is making great strides towards embodying all the elements and factors of sustainable development, primarily human growth. This came in Kuwait’s speech during the 215th session of the Executive Board of the United Nations Educational, Scientific and Cultural Organization (UNESCO), which was delivered by the Permanent Representative of Kuwait to the organization, Dr. Adam Al-Mulla. Under the leadership of His Highness the Amir Sheikh Nawaf Al-Ahmad Al-Jaber Al-Sabah, Kuwait is making steady progress towards preparing the rising generations, Al-Mulla said, referring to the national development plan “New Kuwait by 2035”, which embodies all elements and elements of sustainable development work, especially in the area of ​​human capital development.

Al-Mulla said Kuwait spends 12% of its total expenditure on education, adding that it is one of the highest proportions in the world. He said that Kuwait has helped developing countries through several initiatives launched by some institutions like the Kuwait Fund for Arab Economic Development. He referred to the Education Transformation Summit held last September which aimed to discuss solutions to change education by 2030 and develop education systems to follow and support the transformation of societies. . The summit emphasized continued global mobilization and urged member states and partners to pursue education transformation, focusing on tangible actions on the ground, he said. Kuwait wins a seat on UNESCO’s Executive Board for 2021-2025 at the 41st General Conference.

reiterated
Meanwhile, the UNESCO Arab Group reiterated that the Palestinian cause is central to Arabs. This happened during a speech he gave by Al-Mulla on behalf of the group. Al-Mulla said that the Arab group sees the continued silence of the international community and the organization against the suffering and tragedy of the Palestinians and historical injustice leading to further erosion of the international system, its institutions and its foundations, and consolidate the apartheid regime in Palestine and the occupied Arab territories, including the Golan Heights.

He stressed that the Arab group condemns, in the strongest terms, the storming by Israeli settlers and extremists of the Al-Aqsa Mosque which is carried out daily under the supervision, organization and protection of the forces. of occupation against the Al-Aqsa Mosque. Al-Mulla saw this escalation as an integral part of the Judaization processes of Jerusalem and attempted to annex the city to the occupying state, alter the characteristics of the city and its legal, historical and demographic position. (KUNA)