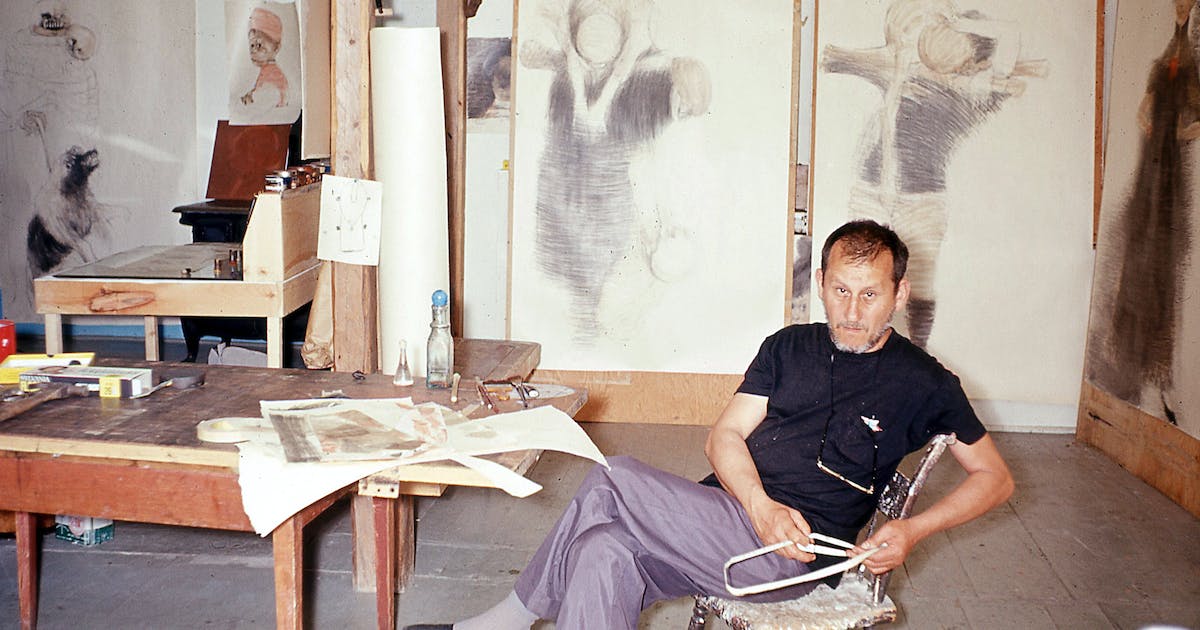 At first glance, the â€œEnvisioning Evilâ€ exhibit does not appear malicious. Featuring the work of Argentine-American artist Mauricio Lasansky, the show begins with a series of portraits – of his 13-year-old son, Leonardo, with large round black eyes and folded hands; of himself, shown in profile in a high-necked white turtleneck; of a Roman Catholic Cardinal, created during a Guggenheim Fellowship in Spain.

These are just portraits. The evil begins in the adjoining gallery, with its labyrinth-shaped entry for “The Nazi Drawings,” on display at the Minneapolis Institute of Art until next June. In this series of 33 drawings, mostly made between 1961 and 1966, Lasansky takes the horrors of the Holocaust off the page, in your throat and in your guts, where they will simultaneously simmer and stab you.

“He’s so angry, he’s pressing so hard, it feels like his pencils are breaking,” said Rachel McGarry, associate curator at the Minneapolis Institute of Art.

Lasansky was born in Buenos Aires in 1914 to Jewish immigrants. He resided there until 1943 when he moved to the United States and became a well-known printmaker.

His motivation to raise awareness of the Holocaust struck in 1961, when the Jerusalem District Court tried and ultimately executed Adolf Eichmann, a senior Nazi official and one of the main organizers of the Holocaust, who had fled in Argentina and was later captured by Israeli agents.

At the start of the series, the Holocaust was not known as the Nazis’ attempt to genocide the Jewish people, as it is today. Lasansky also wanted to convey the suffering of Roma, Sinti, Poles, Soviet prisoners of war, LGBTQ people and many more. He chose to do it through drawing, a medium that anyone can use.

His drawings toured the United States from 1967 to 1970, with a stop in Mexico City. In 1972, the series was acquired by Richard and Jeanne Levitt of Des Moines, fulfilling Lasansky’s wish that the drawings be kept together.

The 33 larger-than-life drawings are filled with death, often represented by a bare skull taking on the head of a human. In one drawing, a Nazi soldier standing inside a gas chamber raises a bloodied hand in the â€œHeil Hitlerâ€ salute, and a skeleton sitting on his shoulders points the shower towards the youth.

Lasansky also lashes out at the Catholic Church for its inaction as millions of people were murdered in Europe. In one drawing, a stunned pope, standing in a pose a la “PietÃ ” – generally used to show mourning for the body of Christ – holds a dead and naked child in his arms.

â€œMany church leaders have failed to speak out,â€ she said. “Why hasn’t the Pope [Pius XII] speak out? He was in a strong position. “

One of the reasons this show has come to Mia now is the diminishing awareness of the Holocaust among Millennials and Gen Z. In a survey released early last year, 63% believed that the death toll was less than 2 million (the actual total is 6 million). More than half could not name any of the 40,000 concentration camps.

In another drawing, “No. 30”, the artist’s own body becomes possessed and mutilated by a skeleton, as if working on this ten-year series destroys it.

Unlike most exhibits, the artist’s statement comes at the end.

Lasansky, who died in 2012, wrote that dignity is a force by which man survives, and once it is suppressed – as was the case in Nazi Germany – man becomes a self-destructive animal that erases history and poisons the future. Evil can lurk within any of us, he warns, making this series even more haunting and timeless.

Delic – Nahyan: Sarajevo is committed to the development of tourism