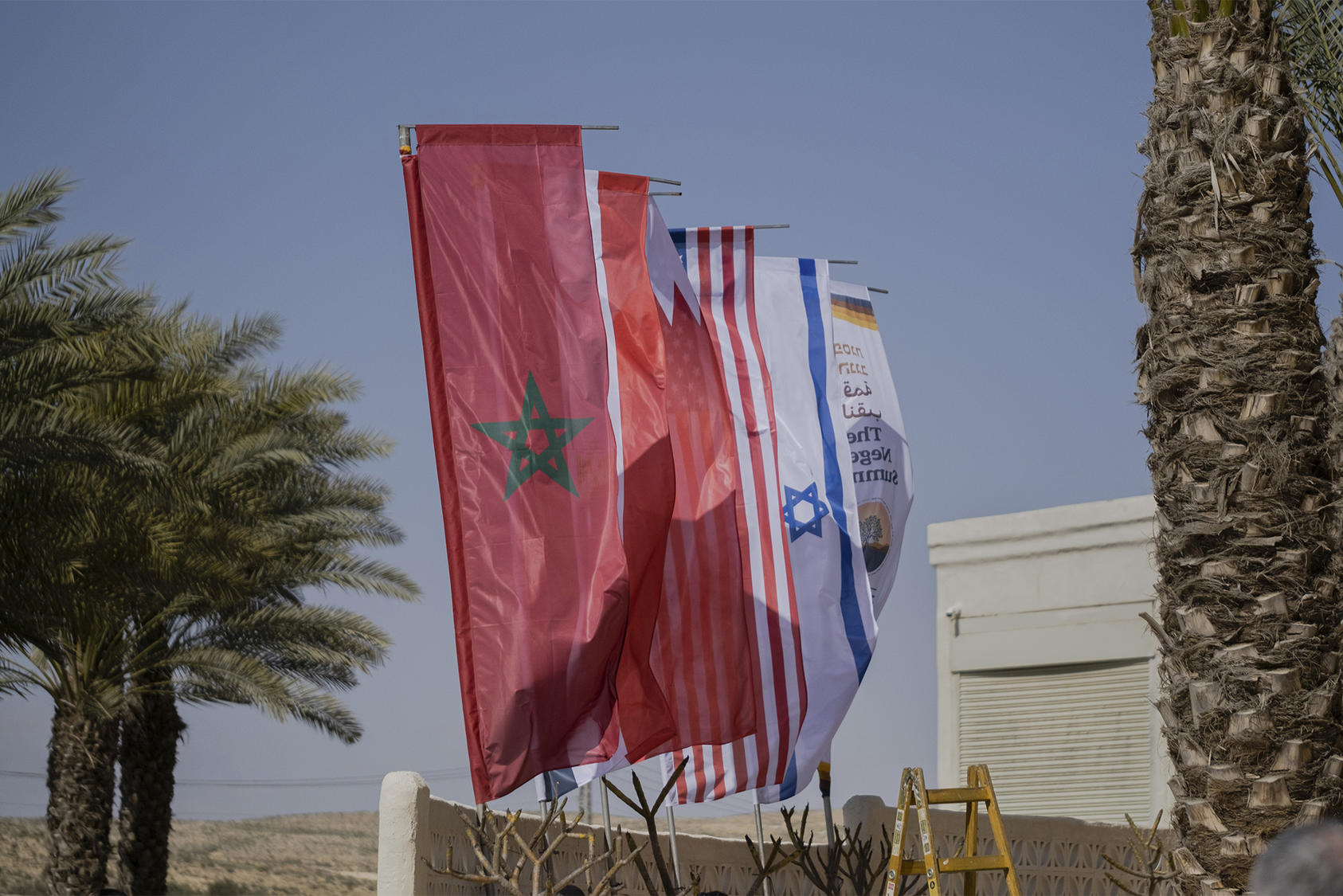 The summit offered a chance to further normalize ties between Israel and the Arab states that signed the Abraham Accords. What progress has been made – both tangible and symbolic – and what does this tell us about Israel’s continued diplomatic position in the region?

Kurtzer-Ellenbogen: There was a healthy dose of symbolism atop the Negev from the start, starting with its location. With four Arab foreign ministers meeting at the invitation of their Israeli counterpart at Kibbutz Sde Boker – the final residence of Israel’s founding prime minister and first signatory of the country’s declaration of independence – Israel’s acceptance in the area has been reported with a poetic touch.

Perhaps the most tangible outcome of the summit was the announcement that it would henceforth become a permanent rotating forum, and press reports reported the formation of six workgroups focus on security, energy, tourism, health, education, and food and water security.

With echoes of the five task forces emerging from the 1991 Madrid Peace Conference, there is another, albeit unintended, symbolism that ran through the Negev gathering. Unlike the convocation of Israeli and Arab leaders to Madrid three decades earlier, which was co-hosted by the United States and Russia, this initiative was “local” and country-based.

The only non-regional party present this time was the United States – a guest at this otherwise regional party. And while Israel’s Foreign Minister Yair Lapid was the only one to explicitly refer to “a new regional architecture to deter common enemiesthe summit underscored regional players’ concern about the reliability of the United States to safeguard their interests. They appear to be leaning towards self-reliance instead, while pleading with the United States for continued support and the need to maintain the Middle East as a strategic priority.

As for Israel’s diplomatic position in the region, 55 years after the famous “three no’s” of the Arab League summit in Khartoum – “no recognition of Israel, no negotiations with Israel, no peace with Israel” — The Negev summit and its focus on regional cooperation and coordination sent the signal that not only is Israel now accepted by key players in the Middle East, but that it is itself an integrated regional player.

The Arab states present continued their dialogue with Israel despite little progress on a solution to the Israeli-Palestinian conflict – a historic red line for normalized relations. Where does this summit leave the future of Israeli-Palestinian talks and a two-state solution?

Kurtzer-Ellenbogen: Whether by coincidence or by design, the Negev summit took place 20 years to the day after the adoption of the Arab Peace Initiative (API) at the Arab League summit in Beirut in 2002. This initiative, revolutionary at the time, offered full normalization and peace with Israel upon Israel’s acceptance of a Palestinian state and the achievement of a solution to two states.

This IPA paradigm of a Palestinian state in exchange for normalization was significantly shattered with the announcement of the Abraham Accords in August 2020. And the glaring absence (let alone invitation) of Palestinian leaders to the Negev summit underscored how incidental the nascent set of newly normalized relations are to the Palestinian cause – flourishing despite any lack of progress on this front.

Yet, out of sight did not equal out of consideration. US Secretary of State Antony Blinken emphasized and reaffirmed the US goal of a two-state solution in his prepared remarks after the summit. Likewise, Moroccan Foreign Minister Nasser Bourita and his Egyptian counterpart Sameh Shoukry have underscored its importance, with the latter bringing the issue to the fore.

So while the current leader of Israel’s government, Prime Minister Naftali Bennett, made it clear that the pursuit of two states was not on his agenda, Sde Boker’s message was that the end goal paradigm of two states is neither gone nor forgotten. .

Notably missing from the gathering was Jordan – the second signatory to a peace deal with Israel. Whether it was a scheduling conflict or a strategic decision, Jordanian Foreign Minister Ayman Safadi instead accompanied the Jordanian monarch, King Abdullah, to a meeting in Ramallah with the President of the Palestinian Authority. Mahmoud Abbas on concerns about the prospect of violence in Jerusalem as Ramadan, Easter and Passover are about to coincide.

As the country arguably most at stake with the perpetuation of the Israeli-Palestinian conflict, the persistence and growth of the Israeli occupation and the death of a two-state solution, one could not help but read the importance of juxtaposing the summits with King Abdullah’s meeting in Ramallah, intentionally or not.

Jordan’s absence is not the only reminder that popular Arab sentiment is not yet fully on board with “the new normal”, and that some leaders need to tread carefully. Sudan, the fourth of the “new normalizers”, was also absent amid the ongoing domestic crisis. And Saudi Arabia – despite its progress silent cooperation and stronger gestures towards Israel – has yet to join the ranks of the normalizing states. It is a sign that the Palestinian issue still weighs heavily on Arab consciousness and, with it, the ability to thwart full-fledged regional cooperation and diplomatic detour. Israeli-Palestinian talks seem far from in sight. The takeaway from Sde Boker is that this will not impede progress in areas of mutually beneficial cooperation with Israel, but such cooperation will not make the problem go away either.

Yousef: This summit sends a number of important messages to both the Israeli public and the Israeli government. This puts another nail in the coffin of the continued false assertion from some circles in Israel that Arab countries do not accept Israel in the region.

Furthermore, it also sends a message that the claim that Arab countries are no longer interested in the Israeli-Palestinian conflict is not true. It will be difficult for public opinion in Israel not to record that those occupying the six podiums at the summit press conference officially support the two-state solution.

The message to the Palestinians was that their cause was not forgotten. But at the same time, some Arab countries may not be willing to wait for them and proactive and constructive action from their leaders is expected, especially in terms of reconciliation and good governance. The fear is that the Palestinian public is already moving beyond the two-state paradigm.

The subject of Iran and stalled talks to revive the nuclear deal loomed large at the summit. Was there a consensus on how the participants viewed the situation? What are regional leaders looking for when it comes to Iran?

Yousef: There is no doubt that reviving the nuclear deal is a matter of great importance to those involved at the summit and beyond. The U.S. summit partners recognize that this issue has been an urgent priority for the Biden administration since taking office, that the administration has a clear belief that the previous administration’s maximum pressure policy has failed, and that therefore a return to a similar approach was highly unlikely unless Iran proved totally inflexible and unreasonable in its positions.

With reports that a possible agreement is approaching, it can be assumed that the Negev summit was the occasion to discuss the two possibilities: that an agreement is reached or that this last effort also fails.

It is doubtful that the summit was aimed at reaching a consensus among the participants, as the positions of these actors vary widely and focus on different concerns regarding Iran. Israel’s most immediate concerns are more focused on stopping Iran from developing nuclear weapons. Meanwhile, a number of countries in the region, particularly in the Gulf, are more concerned about Iran’s destabilizing policies in the Middle East – and in particular Iran’s support for its proxies in places such as Lebanon and Yemen, as well as its missile program.

The Biden administration has also argued that once a deal is back in place, it will aim to bolster Iran’s nuclear commitments and curtail its destabilizing policies, a tall challenge that has likely been taken on board. account in the deliberations. However, the details of the discussions on this matter have not yet been revealed.

What role did Russia’s invasion of Ukraine – and the resulting US-Russian tensions – play in the summit?

Yousef: Shortly after the Russian invasion of Ukraine and the imposition of unprecedented and far-reaching sanctions on Russia, Russia required a written guarantee from Washington that these sanctions will not affect its trade with Iran if a nuclear deal is reached. This insistence threatened to derail the entire negotiation process, but Russia backtracked after a visit by the Iranian foreign minister.

Another important aspect of the invasion of Ukraine is the impact of the current hostilities on food and energy security, particularly in Egypt and Morocco. Egypt is the largest wheat importer in the world and imports more than 70% of its wheat from Russia and Ukraine. Meanwhile, Morocco imports most of its energy needs and about half of its grain needs.

Of course, it will be far more devastating for Lebanon, Syria and Yemen given their already dire humanitarian situation and disproportionate reliance on Russian and Ukrainian exports. markets. The World Bank has warned that Russia’s war on Ukraine is likely to have a destabilizing impact on the Middle East and Africa due to rising prices for oil, wheat, sunflower oil and oil. other commodities.

The invasion of Ukraine also forced the United States to realize that although it was not dependent on energy from the Arab world itself, American influence was needed to try to persuade energy players regions to increase the flow of oil and gas to meet Europe’s needs. energy needs and stabilizing the global energy market – which was particularly crucial at a time of high inflation rates that are detrimental to what is hoped to be the post-COVID era.

However, the most significant impact on the summit in this regard is related to the perception that the United States is withdrawing from the region and the resulting vacuum. In the context of great power competition, Russia and China would be eager to take advantage of this withdrawal. Russia focusing more on the political and security side, relying on its influence in Syria and Libya, while China would focus more on the trade and investment side relying on the involvement of many countries in the region in its “Belt and Road” initiative.