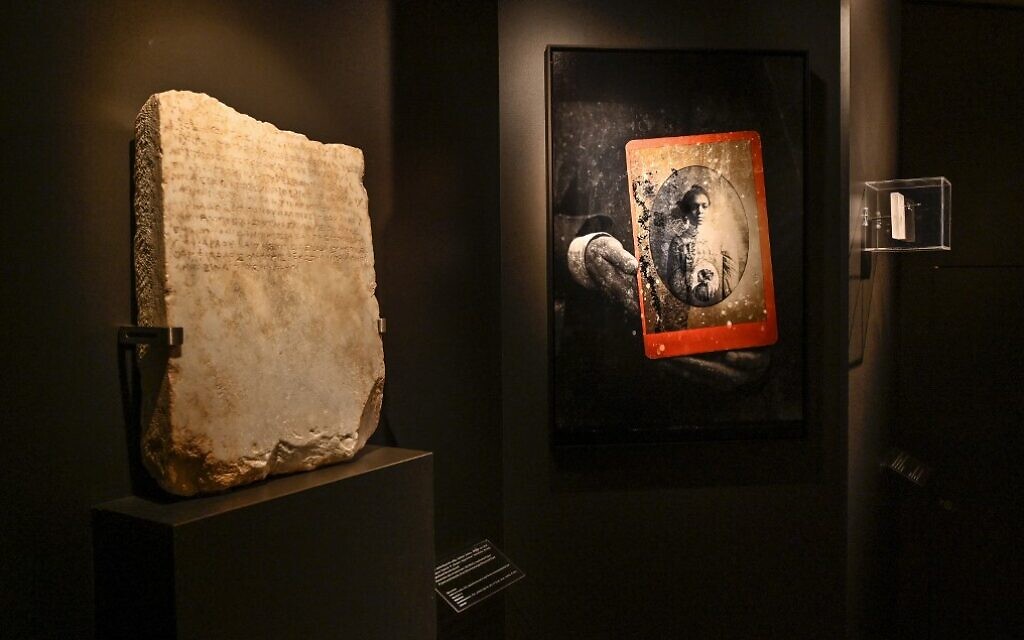 ATHENS, Greece (AFP) — Little is known about the origins of Jews in Greece, but their presence dates back centuries and they were an “integral” part of ancient society, a new exhibit in Athens reveals.

The show is a treasure trove of ancient inscriptions uncovered over more than two decades of research by the Jewish Museum of Greece.

It is the first time that Jewish presence in the country is confirmed as far back as the 4th century BCE – one of the oldest recorded religious and cultural settlements in Europe, according to the show’s website.

Their existence proves the crucial role that Jews played in the social, religious, political and cultural life of ancient Greece, say the conservatives.

“The Jewish community is an integral part of Greek identity, a fact that has been too often denied for centuries,” Greece’s chief rabbi Gabriel Negrin told AFP on Monday at the inauguration of the exhibit.

“This history must be transmitted to future generations in order to combat ignorance and prejudice.”

There are around 5,000 Jews living in Greece today, a small fraction of the Orthodox Christians who make up around 90% of the population.

An estimated 60,000 Greek Jews perished in the Holocaust, about 83% of the pre-war community.

A visitor looks at stelae displayed in the exhibition “Stone Paths – Stories set in Stone: Jewish Inscriptions in Greece”, at the Jewish Museum of Greece, in Athens, on May 17, 2022. (Louisa Gouliamaki/AFP)

Antisemitism is deeply rooted in the country, existing even before World War II in Greece, although the communities coexisted peacefully on the whole.

In Greece, anti-Semitic attitudes are tied to the powerful Orthodox Church, which has not officially absolved Jews for the death of Jesus Christ.

A poll released last year by the Action and Protection League found that about 36% of Greeks polled had “negative feelings” towards Jews.

Nearly 60% believed in conspiracy theories about a “secret Jewish network that influences political and economic affairs.”

Rabbi Negrin hopes the show will shed light on a little-known story — one that is rapidly fading as aging Holocaust survivors around the world perish.

The exhibit, which opened on Tuesday, features a Greek inscription referring to Jews dated between 300 and 250 BCE.

The precious piece was discovered at the sanctuary of Amphiareion near Athens, and refers to a freed slave from Judea.

Curators say the exhibit proves that Greek society has always been multicultural and not exclusively dominated by the Greek Orthodox religion. 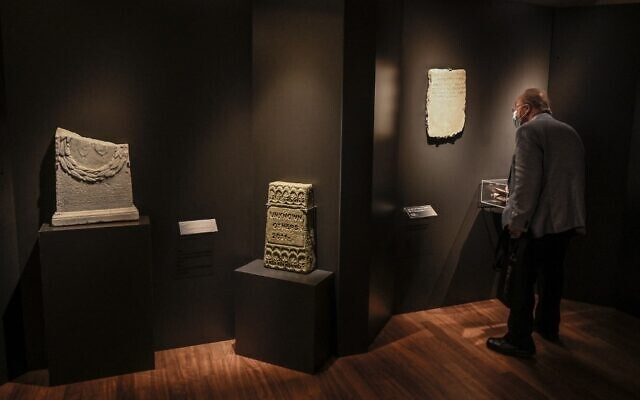 A visitor looks at stelae displayed in the exhibition “Stone Paths – Stories set in Stone: Jewish Inscriptions in Greece”, at the Jewish Museum of Greece, in Athens, on May 17, 2022. (Louisa Gouliamaki/AFP)

The ancient Greek Jewish community, known as the Romaniotes, settled mainly in the northwestern region of Epirus and in the city of Ioannina.

They were followed by Sephardic Jews who arrived from Spain in the 15th century and settled mainly in Thessaloniki, known as the “Jerusalem of the Balkans”.

Until now, the first reference to Jewish synagogues was when the apostle Paul visited Greece in the middle of the first century CE.