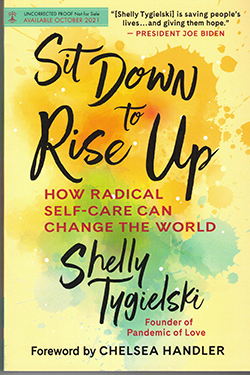 People’s need for community can lead to positive social change

SAN DIEGO – Israeli-American Shelly Tygielski is the founder of the “Pandemic of Love” movement, which advocates for people who reach out, happy to give help and not afraid to ask for it. However, before you can help others, it may be necessary to engage in self-help, prioritize properly, and, as the slang saying goes, question yourself.

For author Tygielski, this meant dealing with an eye disease that threatened to blind her, divorcing a husband, re-adjusting to life as a single mother, and suppressing her insecure-born desire to seek life. approval by always trying to be the best. To deal with this, she wrote questions and answers about what she needed to do to improve her life on a course that ultimately led to meditation.

She found that with eye problems, a young son to raise, a new home and a demanding career, she struggled to do it all. She gathered some acquaintances and confessed to them that she needed help. Likewise, she understood, did all the other women in the group, in one way or another, also need help, albeit of different kinds suited to their individual needs. Women decided that they could help themselves by helping each other; that their group – I am tempted to call it a “chavurah” – could become a caring community. This led to carpooling, shopping for each other, and lending an ear when someone just needed to talk.

Tygielski then developed his idea of â€‹â€‹creating a community. Using social media, she asked who might want to join her on a South Florida beach to meditate on a certain day. It turned out that the day in question was windy, with rain most likely. But she went to the beach anyway and a group of people showed up, undeterred by the weather. Happy with their meditation experience, they told others, and the movement over the months has multiplied. According to Tygielski, up to a thousand people at a time have laid their blankets on the beach to participate in guided meditations.

Tygielski was deeply moved by the mass shootings at Stoneman Douglas High School in Parkland and at Pulse Nightclub in Orlando. Her large meditation group was purposely apolitical, but after these shootings she felt she needed to say something about the need to keep guns out of the hands of people with mental instability and to ban some guns altogether. She was concerned that speaking out might cause dissent – and some people were indeed upset – but for the most part, her decision led her to even greater activism.

She got involved in women’s marches and gun control advocacy. When COVID-19 kicked many people out of their jobs, she conceptualized a love pandemic, in which people who needed help would get it from people who had the resources, the energy and the will to provide it. . She asked people on social media to fill out forms, one stating what kind of help they needed; the other indicating what kind of help they might be able to provide. The response was so overwhelming that Tygielski had to recruit volunteers to manage the volume of attendees and help match recipients with donors.

Tygielski preaches that enmities can be overcome with simple kindness. She says that at one time, as a young girl, she got lost in the old city of Jerusalem, having turned away from the Jewish quarter for the Muslim quarter. She was petrified, imagining all the terrible things that could happen to her, but a young Arab man gently led her back through the maze of streets to the Jewish quarter. Later in her life, she accompanied United Nations officials to an Arab village, fearfully anticipating that she would be among the people who hated her, especially when she saw a portrait of Yasser Arafat on the wall of a House. Then two young children from the house sought her attention to play with them and, following their wishes, she realized how alike all people are, no matter their ethnicity, religion, politics or background.

Kindness can be victorious, she taught a wealthy New York volunteer, a liberal Jewish woman who was matched via the love pandemic with a white woman living in rural poverty in Alabama. At first the Jewish woman opposed it. She believed that their differences of origin and politics would be too great to form a bond. But by sending books to the Alabama woman’s children and providing other help, barriers have been broken and false assumptions have been demolished. The two women even became friends.

Action is the key to Tygielski’s world. She asked for help when she felt she needed it. She posted her idea for a meditation group on social media. She organized a movement for the right people to help each other. Perhaps none of this could have been accomplished if she hadn’t overcome her insecurity and made up her mind to take the initiative to reach out to others.

*
Donald H. Harrison is Editor-in-Chief of San Diego Jewish World. He can be contacted via [email protected]

Church-Community Connection: It’s Never Too Late to Start Winning in the Race for Life | Characteristics