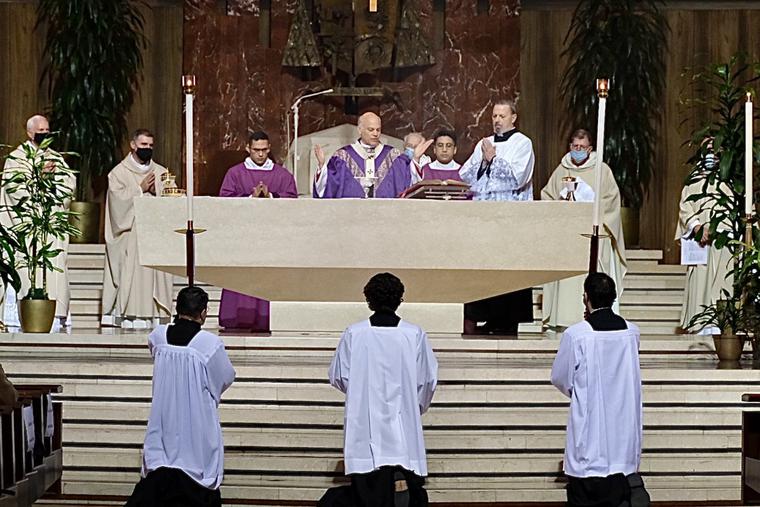 What did Christ mean when he told Peter to feed his sheep? What is the Christian’s responsibility towards the poor, and what are the limits of the meaning of poverty and of our moral response to it?

Like a suddenly slowed and irregular frame rate designed to refocus our attention during a documentary film, images of the homeless on the streets of downtown San Francisco passed us as we drove toward St. Mary of the Assumption. We were heading to the annual Mass in Remembrance of the Fallen Homeless, brought this year by Frank LaRocca’s musical world premiere. Requiem Mass for the Homeless.

In recent years, Archbishop Salvatore Cordileone and the Archdiocese of San Francisco have started celebrating an annual mass to commemorate the homeless who have died. This year, the event will be reinforced by the artistic efforts of the associates of the Benedict XVI Institute for Sacred Music and Divine Worship.

Worshipers entering the cavernous cathedral would be immediately greeted by a stunning new painting – Patron Saints of the Homeless – by Bernadette Carstensen, the painter in residence of the institute. The painting is situated between modern realism and traditional iconography, representing the saints of suffering (Saints Antoine, BenoÃ®t Labre, FranÃ§ois, Maximilien Kolbe, ThÃ©rÃ¨se of Calcutta and JosÃ©phine Bakhita) surrounding Our Lady with Christ in her arms. It is an image of immense and strident strength, which is even more marked when I met the artist, a young mother with clear humility and an almost whispering tone, surrounded by little children who are were wondering why “Mum’s painting” was now in the cathedral.
The opening of the Mass, with an estimated crowd of 400, was signaled by a single note submerged in the organ and strings, humming mournfully as the overwhelming first words of the requiem were sung in a low voice.

As this audible existential moan was supported by female voices and the orchestration became more complete, the music continued plaintively, with a clear and increasing rhythmic propulsion forward and striking harmonic language. Yet even with the full ensemble in stride, the tone and timbre of the work remained dark, in part due to LaRocca’s striking choice to use only the lower strings, removing the standard violin parts. of the score.

The music grew upward and slightly brighter, the violas finally maintaining a higher hum as the sopranos and violas sang in mimicry of the opening lines, with an effect similar to looking through. the mirror and perceive the reality of your own pained and withered face. return (or was it the face of shared guilt?).

The music in this requiem, firmly rooted in the aesthetic magisterium of the Church but clearly reaching new heights, seemed tailor-made not only to mourn the homeless, but to immerse the listener deeply into the painful individual reality of those who were lost in the streets.

During his homily, Bishop Cordileone explained the truly counter-cultural and – in our time, counter-ideological – approach to alleviating the suffering of the poor. Going beyond the short-sighted modern discourse of social justice and institutionalized grievances, he instead spoke forcefully about the misery of the poor and their inherent and equal dignity. The Archbishop also went further by evoking by example the pain caused by the destruction of Jerusalem by the Babylonians and the ensuing spiritual poverty that would accompany their exile and destitution. He said:

â€œYet even in the midst of such intense misery, the lamenter finds reason to hope: the Lord’s favors are not exhausted, his mercies are not exhausted. Good is the Lord to him who waits for him, to the soul that seeks him. It is good to silently hope for the saving help of the Lord. The human encounter with love is the way in which God manifests our healthy reason for hopeâ€¦ â€

Yet despite the Archbishop’s homily, the clear aesthetic prompts of LaRocca’s masterful composition, and the new sacred work of art embodying the beauty of the Church in the midst of despair, there were certainly members of the congregation. who could have sensed a mismatch between the splendor of the event and the austere picture outside the church doors.
What about beauty and poverty? Wouldn’t such money be better spent on the poor? The mass included a collection to help the homeless, to ensure their physical and mental well-being.

The charity and the commandment of Christ to feed his sheep extend beyond the temporal and the spiritual, which is why the Church has long recognized and balanced its efforts to this end, in particular by being the greatest patron. beautiful art in the history of mankind until the Second Vatican Council. Yet conflicts abound: like Judas berating the woman with the alabaster jar, the spirit of imminent practicality has always clashed with the human desire – and the Church’s clear call – to create a sacred art of highest quality, with our own time representing the most recent and perhaps most destructive period of iconoclasm and cultural vandalism in Church history.

Yet in a society where a critical percentage of Catholic liturgies are performed irreverently while most Catholics have no notion of their liturgical and artistic heritages, there is indeed great spiritual poverty. In a Church where most congregations do not receive their liturgical heritage – their birthright, which permanently includes sacred art and music – we also face a crisis of spiritual homelessness.
And yet, â€œthe Lord’s favors are not exhausted, his mercies are not exhausted. Good is the Lord to him who waits for him, to the soul that seeks him … “

In this spirit, the Benedict XVI Institute followed the Mass and the first with an intense after-conference with a round table with Archbishop Cordileone, LaRocca and academic William Mahrt. This was followed by interviews with painter-in-residence Carstensen and poet James Matthew Wilson, as well as a searing meditation on physical and spiritual poverty and the global reality of beauty by Anthony Lilles, a faculty member at St Seminary. Patrick, who would say:

â€œIn the eyes of my neighbor, a deep beauty bursts forth that remains undefeated, no matter how many times it has been trampled on or forgotten, even by the person who possesses it. This beauty is what Adam saw when he first opened his eyes to Eve. It is no coincidence that the resurrection of the world depends on the beauty of women. Or that Charles PÃ©guy describes hope as a girl, a little girl. Today this little girl is much needed.

The evening ended with a performance of three choral arrangements from the Tantum Ergo, by Kevin Allen, LaRocca and a world premiere by Bobby Chastain. Then, in a spontaneous moment of festive meditation, one of the youngest conference attendees, violinist Yvette Kraft, began playing Bach, connecting the new and the old in a way that made all things shine.

The next morning, prominent Catholic composers and conductors from across the country gathered to break bread and discuss issues surrounding sacred music in the Church in the United States, as well as ways to streamline relationships. between living composers, conductors, parishes and their music programs. . The concern centered on respecting what Mahrt called The musical form of the liturgy (a highly suggested book, by the way) in a new and vibrant way. It was not a discussion of tradition as a museum piece, but rather of growing tradition as if it were to keep a living fire going. It all felt like a watershed moment.

Beyond the resplendent liturgy, music and the conference that followed, some participants surely saw the issue of homelessness and human dignity represented in a new light. Others, like me, saw it entirely new. A poverty in my understanding had been alleviated, a path to a new understanding was born, and a deep sense of the connection between the beauty of the dignity of the homeless person and the beauty inherent in the deepest expressions of the aesthetic magisterium engendered: all poverty requires an attempt at alleviation.

Note that the Church in its fullest sense is not simply an ambitious NGO, which feeds the poor while offering some corollary religious activities to those who need a little piety in their life. On the contrary, the Church in its truest sense finds its identity in the fullness of the person of Christ, approaching him through the vitality of a reverent and transcendent liturgy where the greatest art is present. Then, carried by this source and this summit, it launches out into the larger world, seeking to alleviate the poverty not only of the body, but also of the spirit and the soul. These were the ambitions of the weekend surrounding the first and after the conference of the Requiem for the homeless, and such are the efforts that Catholics desiring a powerfully transforming Church can now join in supporting.

In the midst of our present darkness, a new Catholic rebirth is being prepared by God, if only we would have it on His terms.