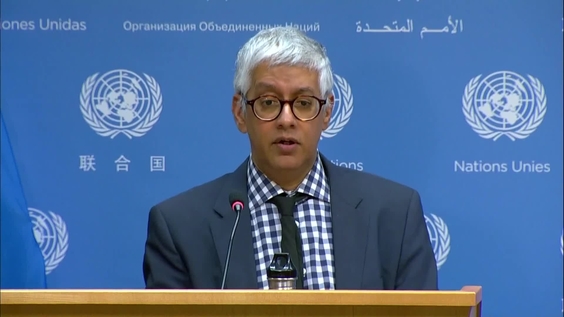 The Secretary-General is traveling to Moscow today, after earlier meeting with Turkish President Recep Tayyip Erdoğan in Ankara. Tomorrow in Moscow, the Secretary General will have a working meeting and lunch with Foreign Minister Sergey Lavrov and will be received by President Vladimir Putin. Turning to Ukraine, UN Crisis Coordinator Amin Awad yesterday called for an immediate halt to fighting in Mariupol to allow civilians trapped in the besieged city to evacuate safely.
This morning, Deputy Secretary-General Amina Mohammed spoke on behalf of the Secretary-General at the opening of the Financing for Development Forum. She said the global economy is under severe pressure and the Sustainable Development Goals need an urgent rescue. We issued a statement on Sudan this morning, in which the Secretary-General deplored the killings of civilians in the locality of Kreinik, West Darfur, as well as the attacks on health facilities on 24 April. Our humanitarian colleagues point out that the recent outbreak of clashes is aggravating the dire humanitarian situation in Kreinik, where more than half of the population – some 265,700 people – was already considered to be in need of humanitarian assistance at the start of this year.
The United Nations Mission in South Sudan today strongly condemned the widespread sexual violence, as well as killings, including beheadings, civilians being burned to death and attacks on aid workers in Leer County.
Tor Wennesland, the UN Special Coordinator for the Middle East Peace Process, briefed the Security Council this morning. He said that in Jerusalem, the situation remains relatively calm despite the inflammatory rhetoric and violent clashes between Palestinians and the Israeli Security Forces (ISF) that have taken place at the holy sites. Last night, the United Nations Interim Force in Lebanon, UNIFIL, detected a rocket launched from southern Lebanon towards Israel. The Israel Defense Forces returned dozens of shells in Lebanon.
The United Nations Mission in Mali strongly condemned yesterday’s attacks against the Malian Armed Forces in Sévaré, Niono and Bapho. Several soldiers were killed during these attacks. At the request of the Malian armed forces, the UN Mission immediately deployed a rapid reaction force in Sévaré.
In a statement issued over the weekend, the Secretary-General hailed the efforts of the President of Kenya, Uhuru Kenyatta, and other East African leaders to promote peace, stability and development in the Democratic Republic of Congo and the greater East African region.
Also, in the Democratic Republic of Congo, the World Health Organization says the country has declared an Ebola outbreak after a case was confirmed in Mbandaka, a town in the northwest of Equateur province. . This is the third outbreak in the province since 2018.
We issued a statement this weekend to express the Secretary-General’s sadness at the death of Mwai Kibaki, former President of the Republic of Kenya.
Our United Nations team in Brazil, led by Resident Coordinator Silvia Rucks, continues to support authorities in responding to the multiple impacts of the pandemic, with a focus on promoting sustainable development.
Today’s guest will be the President of the Economic and Social Council, Collen Vixen Kelapile. He will join us in this room to present the Forum on Financing for Development and the High Level Political Forum on Sustainable Development. At 1:15 p.m., there will be a hybrid briefing here on the United Nations Permanent Forum on Indigenous Peoples. Speakers will be Dario José Mejia Montalvo, president-elect of the United Nations Permanent Forum on Indigenous Issues and head of the National Indigenous Organization of Colombia; and Rose Anne Archibald, National Chief of the Assembly of First Nations. Tomorrow my guest will be Mami Mizutori, Special Representative of the Secretary-General for Disaster Risk Reduction and Head of the United Nations Office for Disaster Risk Reduction. She will present on the UN 2022 Global Risk Assessment for Disaster Risk Reduction. At 1:30 p.m. there will be a hybrid press briefing on the upcoming 55th session of the United Nations Commission on Population and Development. Speakers will include Ambassador Enrique A. Manalo, Permanent Representative of the Philippines to the United Nations and Chair of the fifty-fifth session of the Commission on Population and Development.