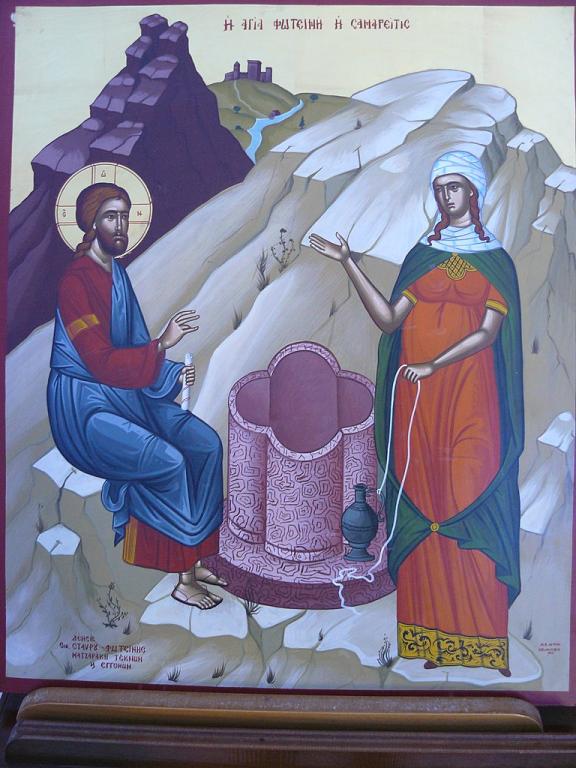 The grace of God is for everyone; everyone is called to drink from the spiritual well and quench their thirst. Christ wants to share the Holy Spirit, and all the gifts of the Spirit, with everyone; Jesus is the anointed; we can and must be united with him, and through that unity also become anointed. Man, woman, Jew, Gentile, sinner, budding saint, all can come to Christ and have their spiritual thirst quenched. All are called; we should not try to put barriers between the Holy Spirit and those who need the gifts of the Spirit, because in doing so, we are likely to be the ones cut off as the Spirit. For, verily, the Spirit blows where it wills, and we will not stop it.

What we need to do is recognize and accept the work of the Spirit where it is. We must strangle the Spirit, that is, we must not act against God’s work in the world. The Holy Spirit will not be compelled. Peter, as the leader of the apostles, was always learning from God, always finding that his beliefs and understandings were challenged and transcended by what God was doing in and through him. As he learned, Peter developed his understanding, and in doing so he developed the church’s understanding of the implications of what Christ taught them. Peter began the long process of doctrinal development, a development that continues to this day, a development that should bring changes to the church. A good example of this can be found in how he learned that God called Gentiles, not just Jews, to his church:

When I started to speak, the Holy Spirit descended on them as on us at the beginning. And I remembered the word of the Lord, how he said, ‘John baptized with water, but you will be baptized with the Holy Spirit.’ So if God gave them the same gift He gave us when we believed on the Lord Jesus Christ, who was I to resist God? When they heard this, they were silenced. And they glorify God, saying, “Then to the Gentiles also God granted repentance for life” (Acts 11:15-18 RSV).

Peter came to understand a truth that had its foundation in the ministry of Jesus. but that it took him time to understand and accept. The development of Christian doctrine is always like this. Once such a development occurs, it becomes clear, although it can and will criticize elements once believed, it is based on tradition and is in continuity with it, for its basis is contained in the tradition (even if he shows himself changing the way tradition is interpreted and understood). Indeed, after such a development, these elements will often be much more apparent than they were before, especially since, on many occasions, these elements were often just as confusing and therefore often not as engaged. than they should have been until development happened. This is probably what happened with Peter and the rest of the apostles when they first reflected on Jesus’ encounter with Saint Photina, the Samaritan woman at Jacob’s well:

A woman from Samaria came to draw water. Jesus said to him, “Give me a drink. For his disciples had gone to the city to buy food. The Samaritan woman said to him: “How is it that you, Jew, ask me for a drink, I who am a Samaritan? Because the Jews have no connection with the Samaritans. Jesus answered him: “If you knew the gift of God and who it is that says to you, ‘Give me a drink,’ you would have asked him, and he would have given you living water.” The woman said to him, “Lord, you have nothing to draw from, and the well is deep; where do you find this living water? Art thou greater than our father Jacob, who gave us the well and drank from it himself, and his sons, and his cattle? Jesus said to him, “Everyone who drinks of this water will be thirsty again, but whoever drinks of the water that I will give him will never be thirsty again; the water that I will give him will become in him a spring of water welling up to eternal life” (Jn 4, 7-14 RSV).

Jesus gave the Samaritan woman the gift of the Holy Spirit, and she was just as confused as everyone else as to why Jesus was talking to her the way he did. Through her discussion with him, she realized that he was the messiah. He showed how well he knew her, and yet, despite knowing everything he knew about her, knowing intimate details that no one else should have known, he still cared about her, by Indeed, he loved her, and was ready to give her what she craved inside. And he was told that the Messianic Age would bring about a transformation in the world, so that people from all walks of life, from different cultures and walks of life, men and women, would find themselves united, worshiping God together in spirit and in truth:

Jesus said to her: “Woman, believe me, the hour is coming when it is neither on this mountain nor in Jerusalem that you will worship the Father. You adore what you do not know; we worship what we know, for salvation comes from the Jews. But the hour is coming, and it has already come, when the true worshipers will worship the Father in spirit and in truth, for that is how the Father seeks to worship him. God is spirit, and those who worship him must worship him in spirit and in truth” (John 4:21-24 RSV).

Jesus, while affirming the special place of the Jews in salvation history, provided the foundation by which Peter and the other apostles could understand how and why, in light of Jesus’ resurrection from the dead, the Spirit would be offered to all, not just Jews. The special place the Jews had in the history of salvation would not be denied, for, as Jesus said, salvation came from the Jews, but the understanding of the significance of the Jews and their covenant relationship has exchange. It was not to be diminished, but increased. The gifts given to the Jews were not meant to be theirs alone, but something that would be shared with all who came together to worship God in spirit and in truth. Peter would therefore have what he needed to understand the action of the Spirit in and with the Gentiles through Jesus’ encounter with the Samaritan woman, although of course at the time he and the other disciples did not. did not see that way, in fact, they only wondered what Jesus was doing when they saw him with Photina (cf. Jn 4:27). So it is with doctrinal development; it is based on a truth which has been given and which is already there, but which was not properly understood until later. And then when such changes occur, we find that a new difficulty arises, because then what we learn has to be put into action, which is not easy because old habits are hard to break.

Staying in touch! Like a bit of nothing on Facebook.
If you liked what you read, consider sharing it with your friends and family!