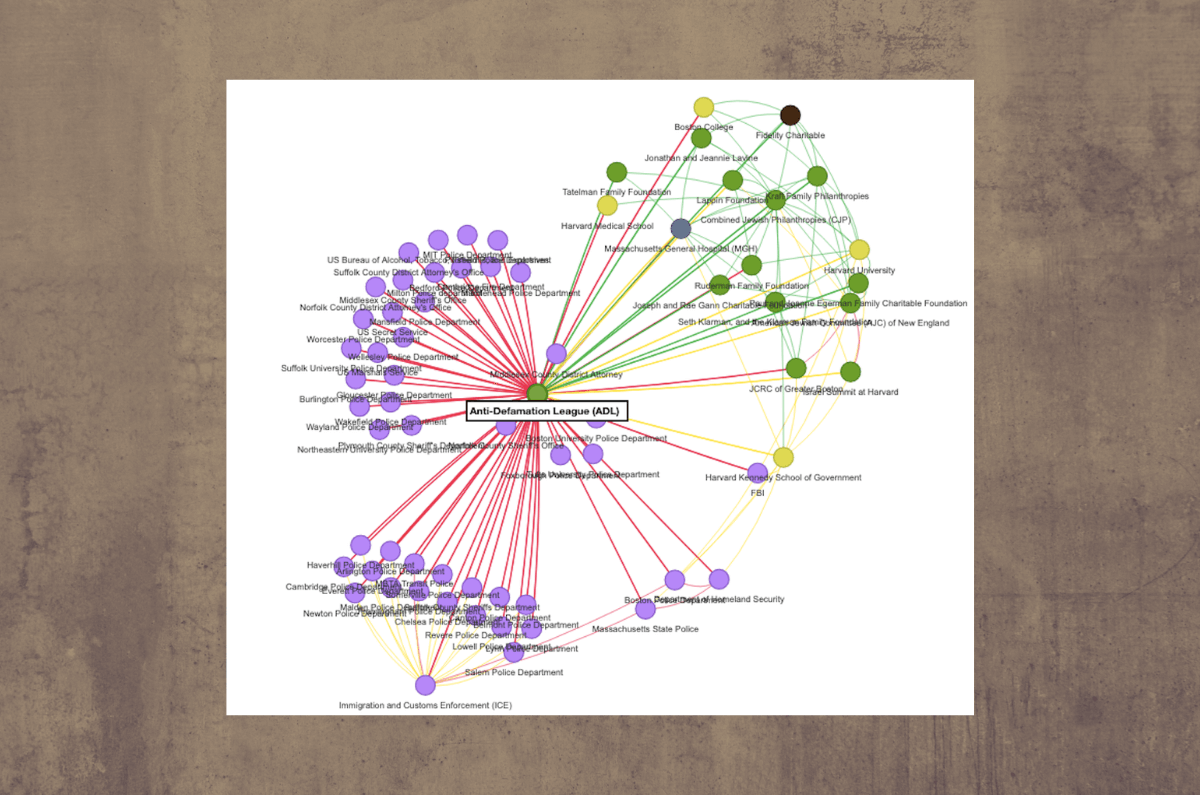 The Mapping Project is not an attack on the Jewish community, it is a call for responsibility – Mondoweiss

Two weeks ago, a Boston activist group called the Mapping Project published an analysis of the “extensive local ties between the entities responsible for the colonization of Palestine…and the economics of imperialism and war… of the police… and of displacement”.

His map included dozens of established Boston-area institutions involved in everything from gentrification and surveillance of housing rights activists to police brutality and the war on terrorism — and countless names that you will recognize: Harvard University, Berklee College of Music, Raytheon, General Dynamics, as well as Governor Baker and Senators Markey and Warren.

We made the project public when it was released, and we honor its findings and method. It is a very traditional form of activism and journalism to map out the establishment ties that support one injustice or another.

After the report was released, all hell broke loose. Critics called the map a dangerous conspiracy theory, which could even incite violence against Jews. These critics do not care about policing, counterterrorism or imperialism. Their focus is the fact that the Mapping Project includes many Jewish groups advocating for Israeli impunity for its criminal behavior. These groups include the Anti-Defamation League, Combined Jewish Philanthropies, Ruderman Family Foundation, Kraft Family Philanthropies, Seth Klarman and Klarman Family Foundation, and the Jewish Community Relations Council of Greater Boston.

And the charge is now familiar: The Mapping Project is guilty of anti-Semitic targeting. In fact, the ADL says the cards are as dangerous as white nationalist propaganda, and will make Jews dangerous in the United States.

The hysteria in the Boston case centers on a small part of the report. Of the 483 entries in the project, 162 deal with Zionism, and less than 45 of them deal with what can roughly be described as “Jewish” institutions. But the hysteria had a big effect. Prominent politicians are scrambling to condemn this latest example of “anti-Zionist anti-Semitism”. Democratic senators and members of Congress are trying to score points by replicating right-wing Zionist organizations and deploring the so-called anti-Jewish conspiracy theory, and columnists are jumping on the bandwagon. Newspapers call it a Jewish “hit list.” And Zionist groups are using the outcry as a stick against the nonviolent BDS campaign.

The attacks on one element of this analysis demonstrate a truth of the report and a problem that we have long pointed out here. Israel lobby institutions have considerable political and cultural power to dictate Israel/Palestine discourse and resulting policy. But they are irresponsible. This power can never be reported. Because it’s supposedly a form of Jew-hatred.

We reject this irresponsibility as Americans (and Jews too). We think it is high time for Jewish Zionist institutions to take responsibility for the mess they helped create in Palestine. When Jonathan Greenblatt attacks the report by stating that only Jewish Zionist organizations are allowed to criticize Israel — his two-handed organizations are T’ruah and J Street — he is simply trying to bolster Israel’s impunity for human rights atrocities. rights that stem in large part from American Jewish advocacy. Greenblatt says that to be a good Jew you must support Israel, a consensus that other Israel advocates have also sought to uphold in the Jewish community.

One of us has long argued that the Israeli occupation is an American Jewish achievement. This is one way of looking at the story that the Mapping Project tells – it describes the material and political support that American Jewry has provided to Israel’s illegal occupation of Palestinian land.

It describes how, in one city alone, for more than 50 years, Zionist organizations within the Jewish community representing the overwhelming sentiments of American Jews have supported Israeli violations of international law in Gaza, the Golan Heights and the West Bank, including including of course East Jerusalem. , and assured that these violations will never be the basis of sanctions by international bodies, let alone cited by American politicians.

This documentation of material support, such as raising funds for the Israeli armed forces and the colonization of Palestinian land, or targeting any criticism of Israel in the American press, is an essential service. This is reminiscent of the documentation Columbia students created of their faculty’s ties to the Vietnam War in 1968, and many other examples over the years. This documentation is also an appeal to the responsibility of the American Jewish community.

But as we have often seen, such calls are not allowed; the Jewish community should only be considered as eternally innocent. The reaction to the Mapping Project echoes the reaction to the Jewish Voice for Peace’s Deadly Exchange campaign which challenges the complicity of Jewish institutions in police violence in the United States. This campaign has been attacked by supporters of Israel in the same way.

Beyond material support for the occupation, the project forces the viewer to confront the political power of the organized Jewish community. This is perhaps the most controversial aspect of the map and a third rail in our politics. Talking about Jewish power is something that only American Jews are allowed to do to celebrate (see Alan Dershowitz – “We have the right to use our power. We have contributed disproportionately to the success of this country.” Or Bari Weiss praising “Jewish power…Jewish success”). But as soon as this influence is denounced, it is a conspiracy theory or a cover of The Protocols of the Elders of Zion.

Let us recall a few events that confirm this power.

Jimmy Carter served one term as president in part because he attacked the Israel lobby over the settlements. Stuart Eizenstat, Carter’s liaison to the Jewish community and later to Hillary Clinton, recently wrote that Carter blamed his loss on opposition from “New York Jews” who had previously supported him but who were alarmed by his criticism of Israeli settlements. Eizenstat candidly describes the political weight of the Jewish community:

It’s become even clearer in the decades since that progress on those same intractable issues that Carter wrestled with forty years ago can only come with a president willing to take enormous domestic political heat and move on. ‘before. No one has done it since with the same combination of courage and determination – in fact, perhaps because of the political wounds he suffered.

Even Tom Friedman attributed the loss of George HW Bush in 1992 in part to his hard line on settlements. “The Republicans after Bush I, and who showed up most in his son Bush 2, made a strategic decision, they will never be pro-Israel again. This, they say, cost them dearly electorally.

Indeed, in 1992, Bill Clinton won the presidency and ran to the right of Bush on Israel issues, and won the blessings of AIPAC, the main Israeli lobbying organization.

AIPAC also had unlimited access to the White House under Barack Obama. Obama’s top foreign policy aide, Ben Rhodes, said he had spent more time dealing with 10 to 20 Jewish groups than anyone else, and that these groups were toying with the line of the Israeli government. “It’s not a conspiracy, it is what it is.”

The number of people you meet from the organized pro-Israel community is equal to any other meetings you might have with some sort of diaspora or constituency groups on any other issues. It’s that degree of dwarfism. In the eight years that I’ve encountered the usual suspects of organized American Jewry so many times…it’s kind of like 10-20 people you run into all the time…It’s not a conspiracy, it’s is it. People defend a position. But it is a common position. Whatever the point of tension between us and the Israeli government at any given time, they usually came to represent what I knew to be the view of the Israeli government in this circumstance… Whenever there was an international incident like the Goldstone report or the Turkish Flotilla report, you have to make sure that you do everything you can at the UN to somehow prevent this from moving forward.

We know how this power was born. The Jewish community has shown remarkable unity in support of Israel since the wars of 1967 and 1973, sometimes at full speed, and has sought to punish dissenters. Even liberal Zionists like the Breira group, or the writer Leonard Fein, were crushed when they dared to cross Israel.

Since then, supporting the Israeli colonization of Palestine has become a common project of American Jewry. And when Al Jazeera dared to produce a documentary about the Israel lobby, American Israel advocates who could claim to have Trump’s ear flew to Qatar and worked to suppress the film.

What we are describing here is political clout at the highest levels of the US political system (surely having a lot to do with campaign contributions). It is in the best democratic traditions of our country to examine such corruption and shine some light on it. Pro-Israel Jewish groups want that sunlight gone.

Unfortunately, the slams keep coming. Monday, Marc Rod of Jewish Insider reported that the head of the FBI’s Boston Division told a Boston Jewish community event that the FBI had investigated the mapping project and “has not yet seen any related threats of violence.” To this we say, of course there is none. This card is not a call to violence, it is a call to responsibility. And given the Jewish community’s decades-long support for Israeli abuse and colonization, it’s clear that this is something they want to avoid at all costs.

So where are the Palestinian voices in the mainstream media?

Mondoweiss covers the full picture of the struggle for justice in Palestine. Read by tens of thousands of people every month, our truth journalism is an essential counterweight to the propaganda that passes for news in mainstream and traditional media.

Our news and analysis are accessible to everyone, which is why we need your support. Please contribute so that we can continue to raise the voice of those who defend the rights of Palestinians to live in dignity and peace.

Today, Palestinians are fighting for their lives as the mainstream media turns away. Please support journalism that amplifies urgent voices calling for freedom and justice in Palestine.