On Sunday, June 5, 2022, the Patriarchate celebrated the feast of the Holy Fathers of the First Ecumenical Council in Nice, under the order of Constantine the Great, where they refuted Arius and established the doctrine of the One Essence of the Son with the Father as read in the Credo.

This feast was celebrated in all the Churches within the jurisdiction of the Patriarchate and in the Holy Church of St. George the Trophy Bearer in the Tur’an Community of Galilee, near the city of Cana. The liturgy was celebrated by Patriarch Theophilus of Jerusalem, with the co-celebration of Metropolitan Kyriakos of Nazareth, Archbishop Aristarchus of Constantine, the senior priest of the community, Father Spyridon, Father Simeon and other priests Arabic and Russian speakers. The chant was delivered by Archimandrite Artemios, the Hegumen of Haifa, in Greek and the parish choir in Arabic. The liturgy was attended by the Orthodox congregation of this parish which the Hagiotaphite Archimandrites Timotheos and Hilarion served in the past.

Before Holy Communion, the Patriarch gave the following sermon in Greek and Arabic and offered an icon to be kept in the Church:

“Making thorough investigation, under the guidance of the divine Spirit, and bringing together all the knowledge of spiritual things, like the scribes of God, the august Fathers wrote this most blessed symbol, the august Creed of our holy faith, in which they plainly teach that with His Begotten the Word of God is also co-beginningless and consubstantial with Him in truth. For these pious, all-glorious and truly blessed saints followed openly with fervent faith all that the Apostles taught” (Matins, Troparion 1 of the Fathers, Praise) proclaims the hymnographer of the Church.

The Grace of the All-Holy Spirit has guided our steps to your city Tur’an of Galilee, to co-celebrate today, the seventh Sunday after Easter, the First Ecumenical Council of Nice, of the three hundred and eighteen Bearers of God Fathers in 325 AD.

These God-bearing Fathers, by the inspiration of the Holy Spirit and by the hands of the Apostles, who bore the Spirit, became the authentic descendants of the Disciples, Apostles, Shepherds and Teachers of Christ, as the most authentic of Christ, and followers of the teachings of the Apostle, as the hymnographer says.

Today’s Gospel story according to the Evangelist John refers to the episcopal prayer that the Lord addresses to God the Father for his disciples, saying: “Holy Father, keep in your name those whom you have given me, so that they may be one, as we are. While I was with them in the world, I kept them in your name: those whom you gave me I kept, and none of them is lost, but the son of perdition; that the scripture can be fulfilled. And now I come to you; and I say these things in the world, that they may have my joy fulfilled in themselves” (John 17:11-13).

In his prayer, our Lord Jesus Christ asks God the Father that his disciples remain united in him as well as among themselves in the bond of love according to the prototype of the union of Christ Son and Word of God with his Father. . On the other hand, he asks his Father that the Disciples have within them the perfect joy that he feels in returning to God the Father. Interpreting the word of the Lord, “that they may have my joy fulfilled in themselves” (John 17:13), Saint Cyril of Alexandria asks himself: “what is this fulfilled joy? To know and believe not only that Christ was human to us, but that he was human in everything among us except sin, and that he is the true God”.

The Holy Fathers of the Church, my dear brethren, are those who established the doctrine of one God Trinity, one Trinity, of the same essence and divinity, and gave to the Church the mystery of Theology, which is the Holy Trinity, as the hymnographer of the Church says: “Let us acclaim today those mystical trumpets of the Spirit, namely the divine Fathers, who, in the midst of the Church, sang a harmonious song of Theology , teaching that the Trinity is one, identical in essence and Divinity; they are the refuters of Arius and the first warriors of the orthodox. And they ceaselessly intercede with the Lord so that our souls may obtain mercy” (Glory of Vespers).

The Fathers who called the first ecumenical council in Nice in 325 AD refuted, as we know, the heretic Arius, because with those who held the same beliefs as him he “errred concerning the truth” (ref. 2 Tim. 2:18). Therefore, my beloved, we are called to the same as the Holy Fathers, according to St. Paul, so that we carefully follow his God-inspired words to his disciple: “Study to show yourself worker who need not be ashamed, rightly dividing the word from the truth. But avoid profane and vain chatter, for it will increase to more impiety. And their word shall devour like a canker” (2 Tim. 2:15-17).

Indeed, my brothers, it is like a canker that the irreverent messages of the “so-called” New Order, the messages of Globalization, are carried. The goal of the New Order is the denial of the redemptive principles and morals of the Gospel, namely the denial of Christ and His Name. “God also exalted him and gave him a name which is above every name” (Phil. 2:9). However, we must not be afraid, because our Lord Jesus Christ promised his disciples before leaving them and ascending to heaven: “I will not leave you comforted: I will come to you” (John 14:18) . I will not leave you alone, I will come to you shortly through the other Comforter, namely the Spirit of Truth, who will dwell in you and unite you to me as members of mine.

This is why the Lord asks God the Father “that they may have my joy fulfilled in themselves” (John 17:13). Christ is the joy of the Church and also the joy of those who love him and commune with his precious Body and Blood. This is why he says, “Enter into the joy of your lord” (Matthew 25:23). And according to Saint Paul, “the fruit of the Spirit is love, joy, peace” (Gal. 5:22).

It was this joy of the Holy Spirit that the Most Holy Mother of God enjoyed when the Savior accomplished the mystery that had been hidden for centuries during His Ascension into Heaven, as the hymnographer says: participate in the unparalleled joy of the glorification of your flesh, O Master, in which we have also participated by your ascension into heaven, and we glorify your great mercy towards us” (Both Now, Aposticha Vespers). Moreover, “following the divine doctrines (of the Fathers) and believing with confidence, we adore, in one Godhead, the Father, the Son and the All-Holy Spirit, the Trinity one in essence” (Glory, Apostiche of Vespers ). Amen! Many happy comebacks.

At the meal, Patriarch Theophilus again addressed everyone present as follows:

“You shall fear the Lord your God; you will serve him, and you will cleave to him, and you will swear by his name. He is your praise and he is your God, who has done for you these great and terrible things which your eyes have seen” (Deuteronomy 10:2021), writes the Holy Bible.

Honorable Chairman and Respected Members of the Ecclesiastical Committee,

Today’s celebration of the Holy Fathers who called the First Ecumenical Council in Nice in the year 325, which was under the order of the pious Emperor of Orthodox Christians Rum Constantine the Great, is of particular significance to us Christians who live in the Holy Land and for the wider Middle East.

We say this because indeed the great historical event of the First Ecumenical Council of the Church signified the precision of the Orthodox faith on the one hand, and on the other hand it shaped the cultural and national-religious identity faithful members of the Church.

The first ecumenical council of Nice is the one that bequeathed to the Orthodox Church the name of “Roumiye” and to the citizens of the Empire the title of “Rum”. And this because the Church is the body of Christ and bears his name, “which is above every other name” (Phil. 2:9), and because she had a supranational character according to the teaching of Saint Paul: “For you are all children of God through faith in Christ Jesus. For all of you who have been baptized into Christ have put on Christ. There is neither Jew nor Greek, there is neither slave nor free, there is neither male nor female: for you are all one in Christ Jesus” (Gal. 3:26-28).

This very pure apostolic tradition of faith which has been preserved by the Fathers of the First Ecumenical Council, as well as the spiritual greatness of the cultural heritage of Romiosyni is realized by the Patriarchate of Jerusalem, the Church of Jerusalem, the Mother of all Churches.

The unceasing and living historical presence of the Orthodox Rum Patriarchate of Jerusalem through the centuries is the irrefutable testimony of the Christian presence in the Holy Land and of the sacred institution of the Church founded by the redemptive blood of Christ.

The God-bearing Fathers who gathered from all parts of the earth in Nice gave the doctrine of our Orthodox faith and theology, namely the doctrine of the Holy Trinity by the illumination of the Holy Spirit and not by contemplative reasoning and philosophical inventions, as Saint Gregory the Theologian says: “we theologize with the simplicity of the faith of sinners”.

Our Holy Church of Jerusalem, my dear brothers, is not only the point of reference for us Christians, but also the guarantee of our existence according to the word of the Lord: “And I tell you also that you are Peter, and on this rock, I will build my church; and the gates of hell will not prevail against him” (Matthew 16:18).

Let our glorification therefore be of the God of our Fathers and of the Church of our God and Savior Jesus Christ, who ascended into heaven and was not separated from us. Many happy and blessed returns. Amen!”

At noon, the Community offered a meal to the Patriarch and to the members of His Entourage.

After the meal, the couple Abu Rami and Im-Rami honored the patriarchal entourage at home with a variety of delicacies. 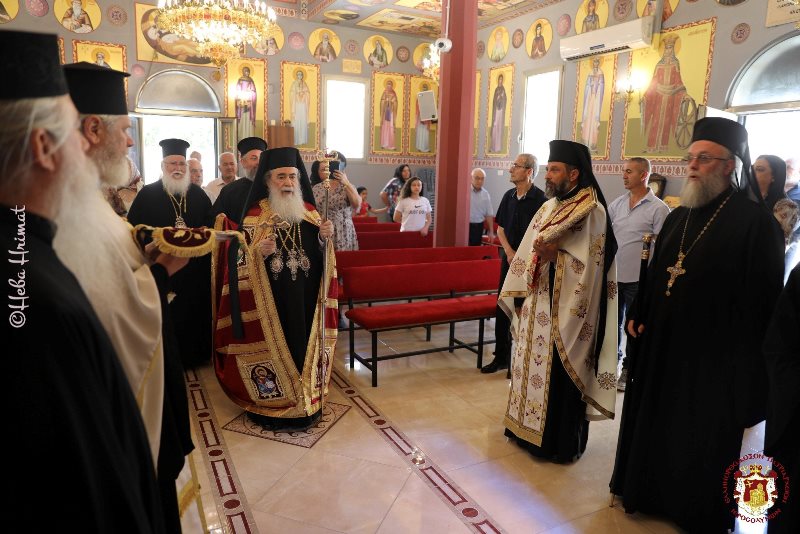 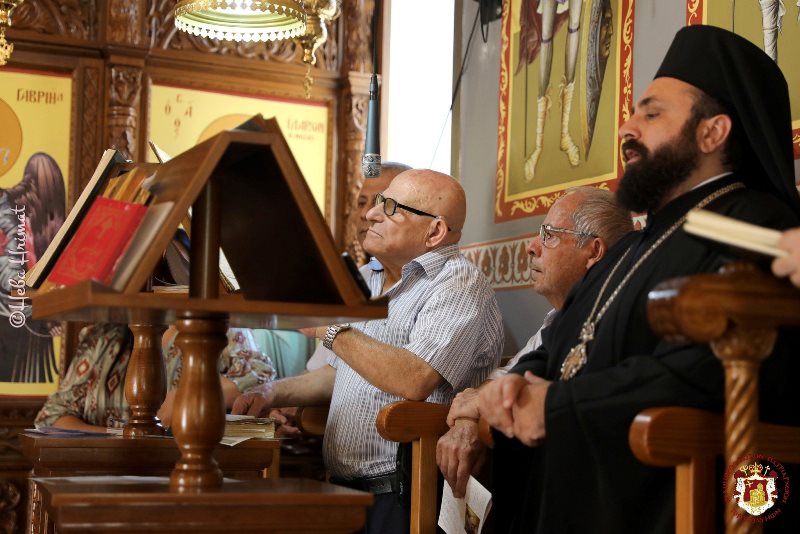 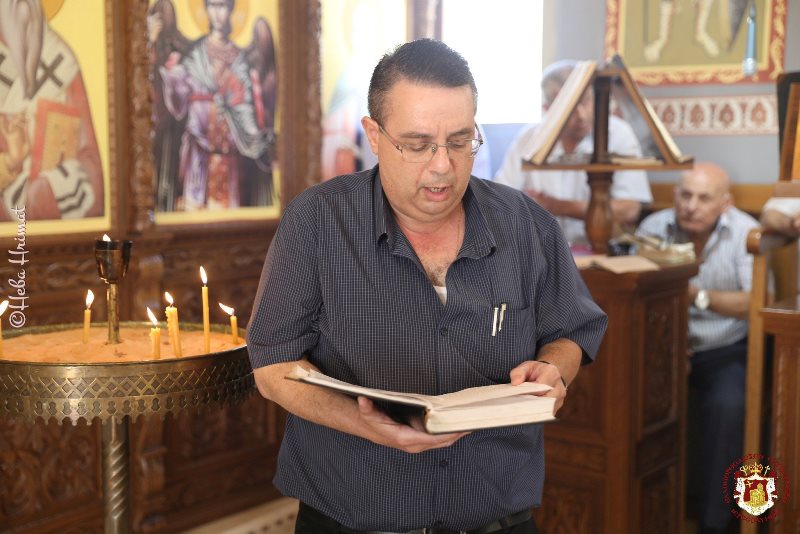 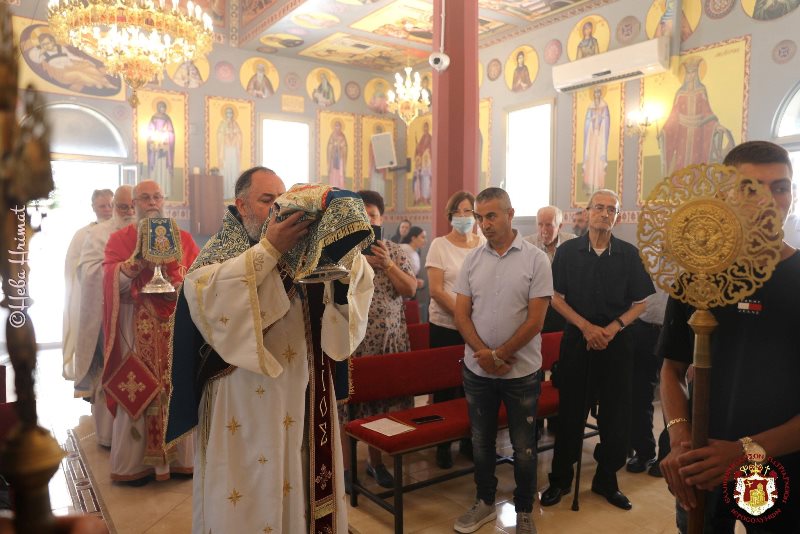 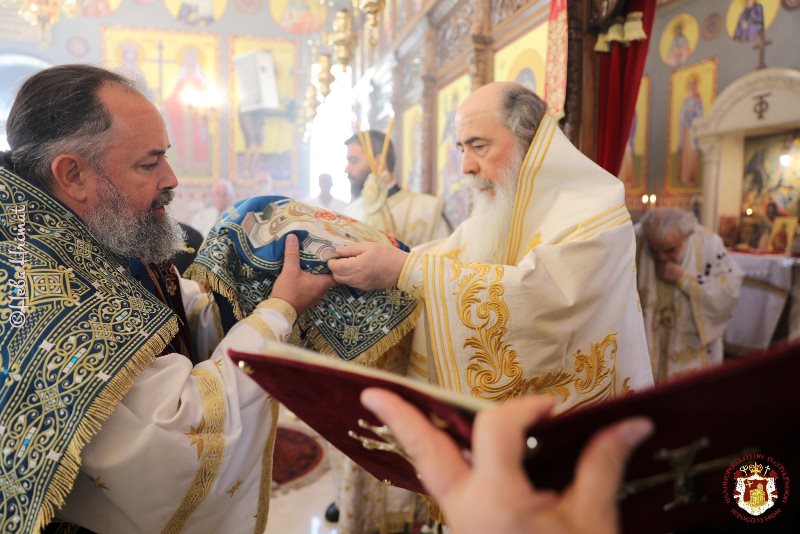 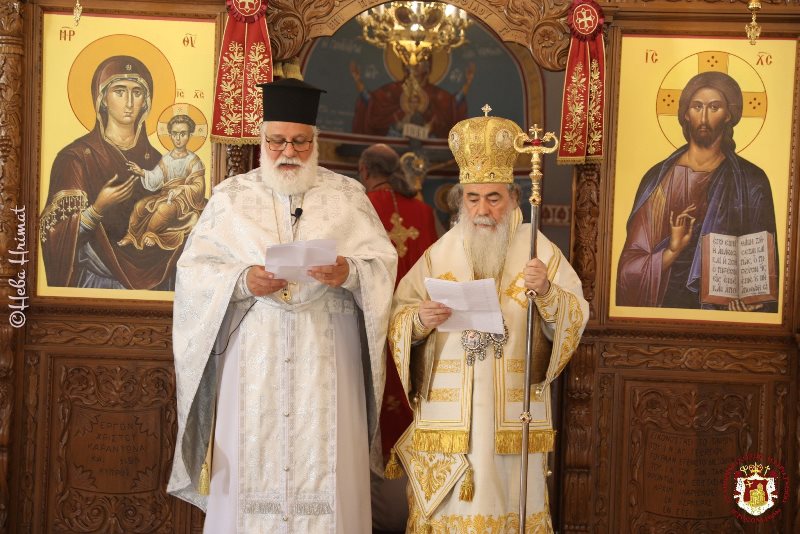 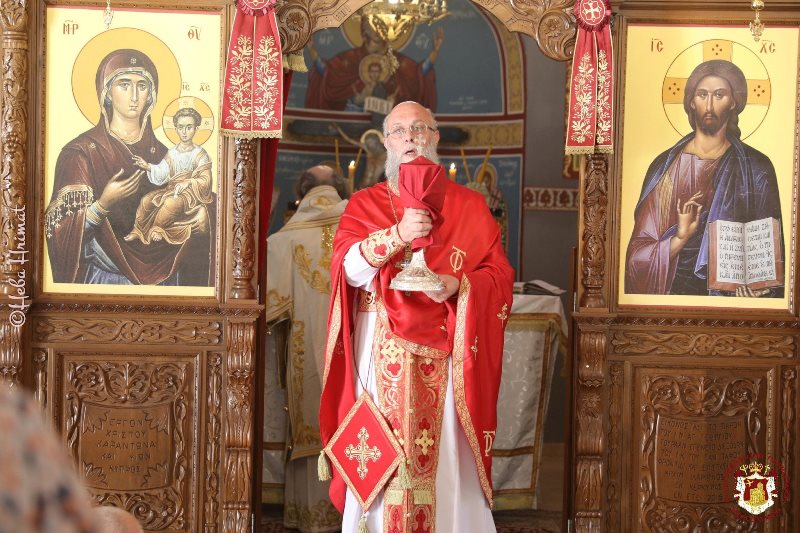 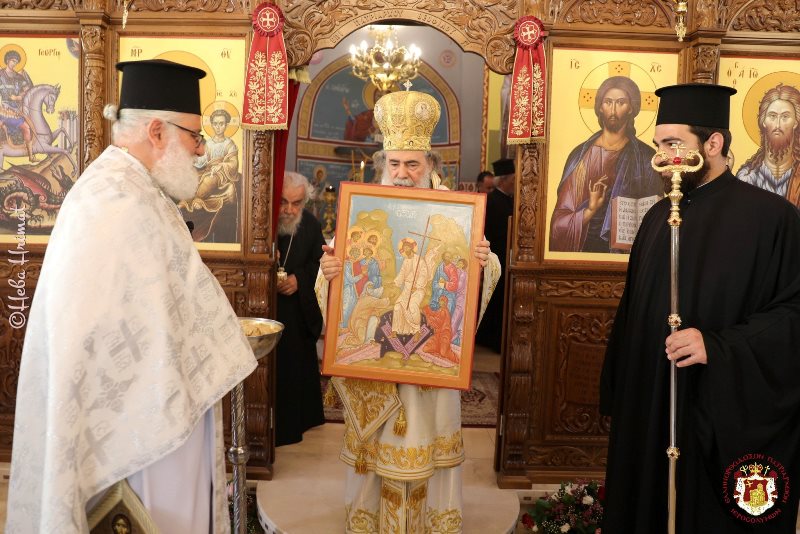 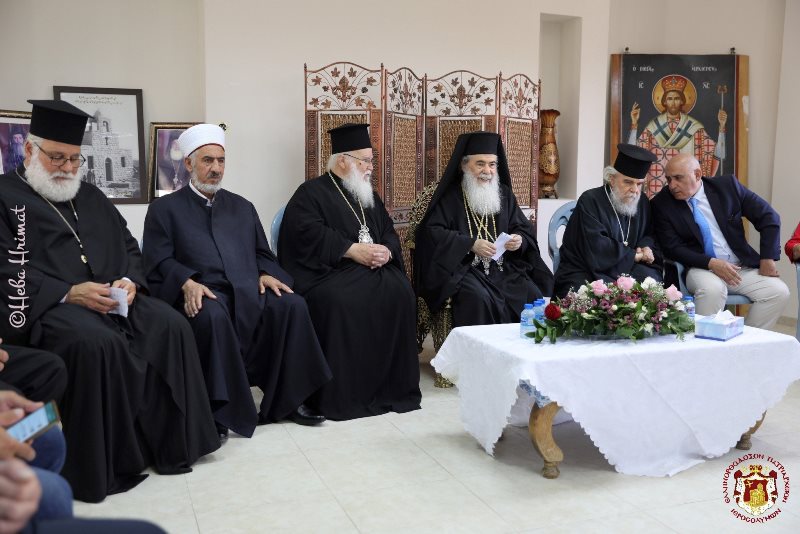 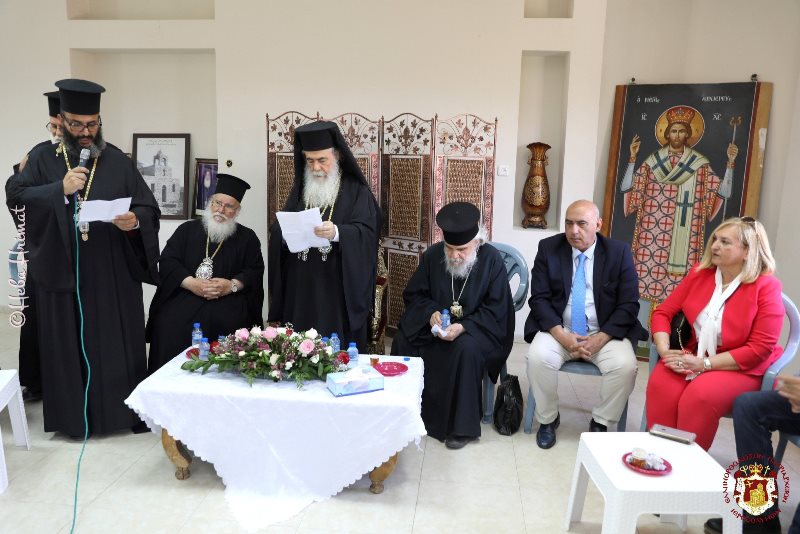 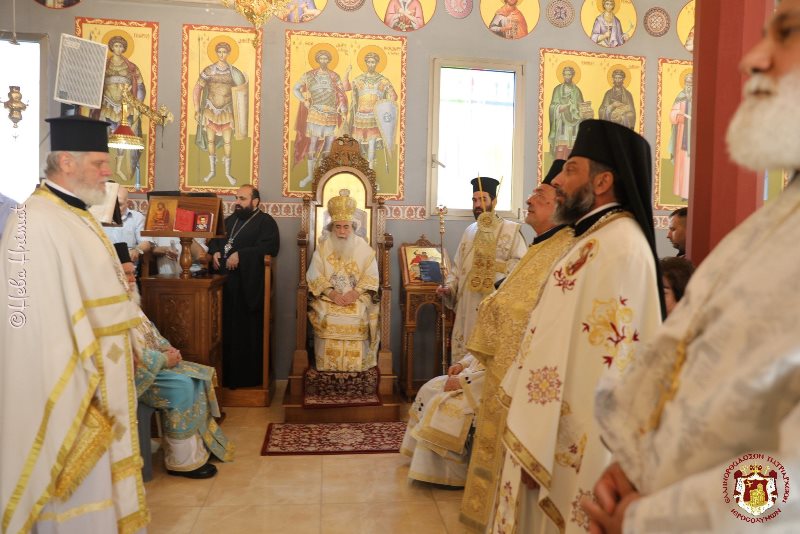 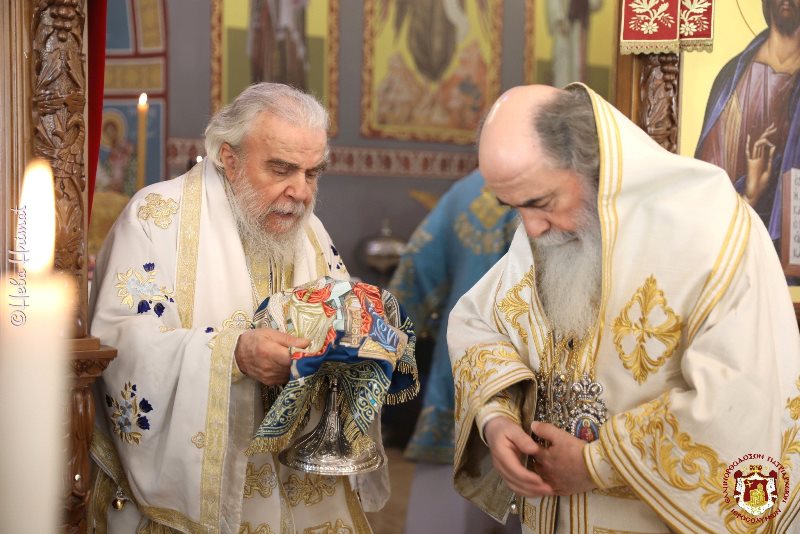 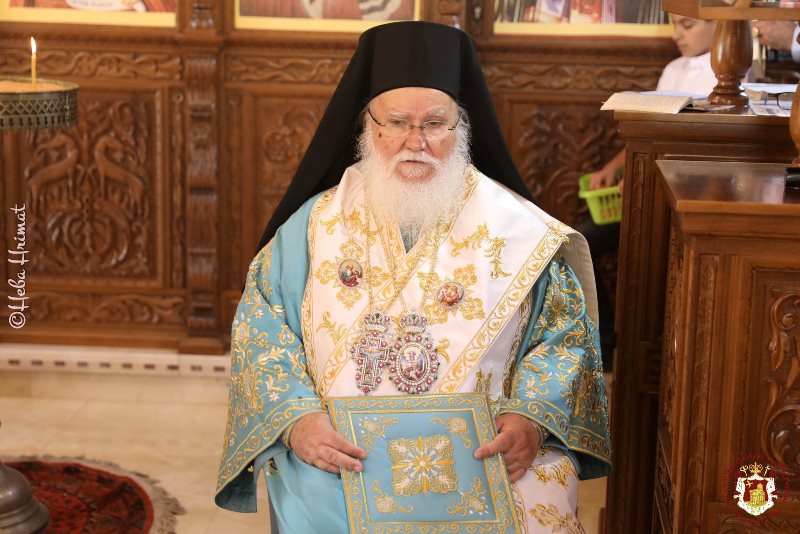 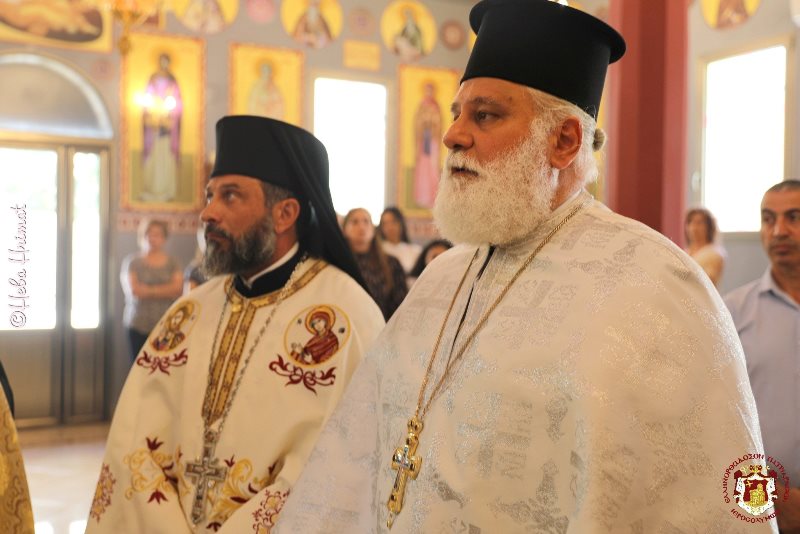 Community of Faith: Leading to More Understanding and Love |