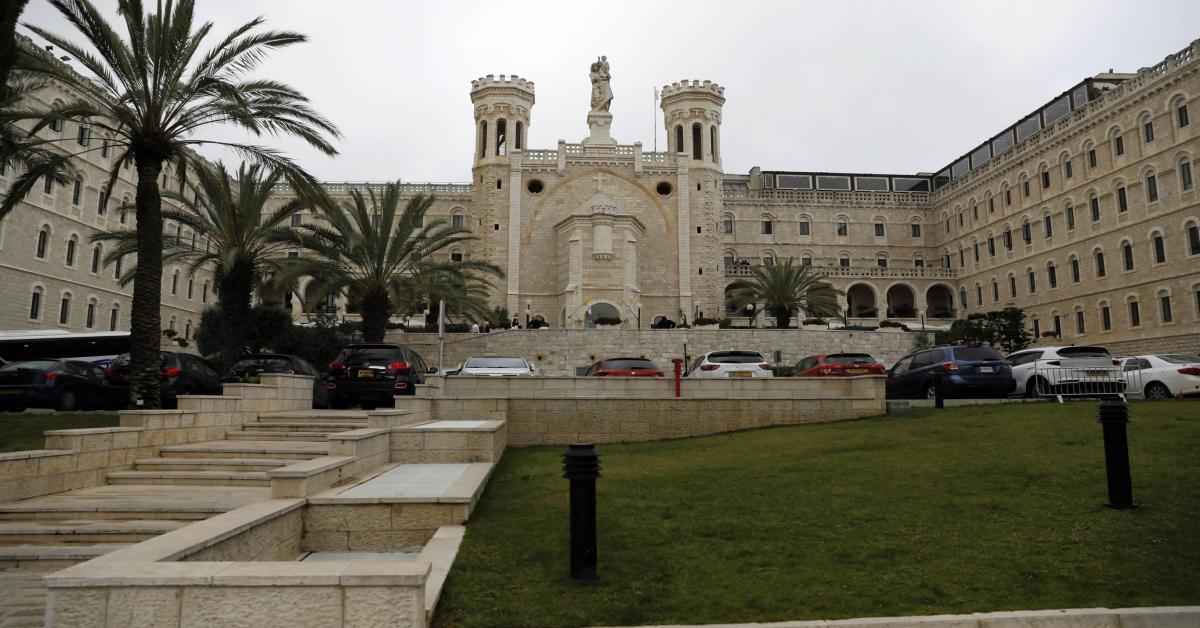 Near Bab al-Khalil, on the west side of the Jerusalem walls and north of the King David Hotel, is the Jerusalem branch of the Rome-based Pontifical Biblical Institute affiliated with the Jesuit Catholic Order. The Jerusalem Institute is made up of a church, a library and a museum that exhibits rare relics dating back thousands of years.

To underline the sacred character of the site, a photo of Saint Ignatius of Loyola hangs at the entrance of the institute. Saint Ignatius, born in 1491 in the city of Azpeitia in the Basque Country, Spain, is the co-founder and first head of the Jesuit order. He had visited Jerusalem in 1523.

Al-Monitor spoke with archaeological researcher Abeer Zayyad, who is also the former director of the Arab department of the Tower of David Museum in Jerusalem. â€œThe building housing the Pontifical Biblical Institute in Jerusalem was built by the Vatican in the 19th century as a scientific and research institution affiliated with the Catholic Church. The three-story building is dedicated to teaching the Bible to students of various nationalities enrolled at the institute.

She said: â€œOn the first floor, the building houses a small church and a museum which contains a rare archaeological collection, dating from the early Paleolithic period until the Islamic era. The museum houses many artefacts discovered by the monks of the monastery who conducted archaeological excavations in the Dead Sea and the Jordan River in the 1930s. These artefacts are mainly related to the Ghassulian civilization in the area which ended around 4000- 3900 BC, and archaeological finds date back to the Chalcolithic period.

Zayyad added: â€œThe museum contains finds from the eponymous site of Teleilat el-Ghassul such as drawings symbolizing the Ghassulian civilization, in addition to the bones of a baby buried in a jar, a ritual practiced in Palestine to bury children at period, as well as a large collection of antique pottery and kitchen utensils.

She noted that the museum also houses a mummy brought from Egypt to Jerusalem, distinguished by its distinctive mummification technique that has preserved its structure intact. She claimed that the mummy is the only one in Palestine. “Many museums in Palestine and even in Israel borrow the mummy to show their visitors some of the antiquities of the Pharaonic civilization,” she said. “The museum [at Pontifical Biblical Institute in Jerusalem] opens its doors to visitors on weekdays to discover its rare collections. “

She added that the museum exhibits Pharaonic seals and statues made of copper and stone as well as various figures of a Pharaonic scarab. “It also includes pottery and glass utensils from the Abbasid, Umayyad and Ottoman periods, as well as a large collection of oil lamps and small sharp weapons dating from the Stone, Greek, Bronze, Byzantine and Islamic periods.”

Robin Abu Shamsiyya, researcher in Jerusalem history, told Al-Monitor: â€œThe Pontifical Bible Institute in Jerusalem has a library, church, museum and kitchen on the first floor. The second and third floors include classrooms and bedrooms to accommodate students coming to the institute from Italy and France to study the four New Testament gospels, written by Matthew, Mark, Luke and John during the fourth. century.

Abu Shamsiyya said: â€œThe Jerusalem branch includes antiquities dating back to the Bronze, Copper and Stone Ages through to the Islamic and Ottoman periods, such as tools for agriculture and adornment, as well as statues of gods venerated during these periods in the Levant. These findings were brought by monks from the Dead Sea, the Jordan River and the Negev as well as northern Palestine to Safed and the Galilee.

He noted: â€œThe Pontifical Museum is qualified to preserve all archaeological finds like any international museum. Many of the artifacts are kept in professionally designed glass boxes, with lighting from all sides to ensure an attractive display.

He concluded: â€œThe Old City of Jerusalem is witnessing a growing tourist movement. The Al-Aqsa Mosque and the Church of the Holy Sepulcher are also popular historical sites. About 6.5 million pilgrims visited the church in 2019. Yet there are no official statistics on visitors to Al-Aqsa Mosque amid Israeli restrictions on travel to and from the mosque.

Regarding the reasons why most of the churches and Christian institutes in the Old City of Jerusalem are affiliated with a number of European countries, Abu Shamsiyya explained, â€œThese countries sought to indirectly control the city of Jerusalem and Palestine during the Renaissance in the 19th century. European countries would send archaeologists and researchers as well as missionary monks whose task was to spread the message of the Latin Church by establishing schools and printing houses. This placed many archaeological sites in the Old City of Jerusalem under European control.

He said: â€œThe Old City of Jerusalem includes churches that house several museums and archaeological assets such as the Greek Orthodox Church of Jerusalem, the Armenian Cathedral of St. James and the Catholic Church of St. Anne.

Issa added: â€œChristian churches and institutions – just like Islamic institutions – are exposed to continued Israeli attacks in the Old City of Jerusalem, including the attack on the Church of the Holy Sepulcher in 1967 and the burning of the Greek Orthodox Church in 2015. More recently, on December 4, an Israeli settler attempted to set fire to the Gethsemane Church in East Jerusalem in the Mount of Olives area. He poured fuel on the wooden pews of the church, but his attempt was unsuccessful after locals intervened to bring the blaze under control before it consumed the entire church.

The low-flying jets frightened the inhabitants of Jerusalem; IDF does not say anything extraordinary

Let it snow! Jerusalemites prepare for a winter wonderland