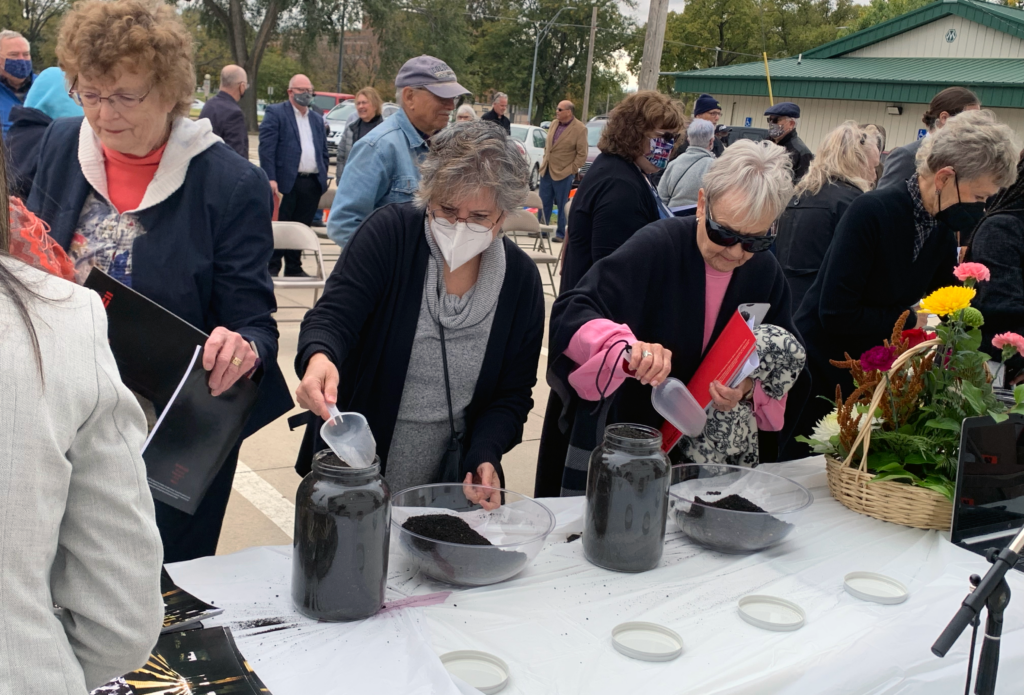 For a Sunday afternoon, Salina, Kansas was braver than the rest of the United States.

The country was seething with anger over the false threat of critical race theory and teaching America’s troubled past in schools, while combating police violence and the dog whistle policy. The rage broke out in school council meetings and on social media. But in the small town of Salina, more than 65 people gathered to honor a victim of racial terrorism, both mourning and accepting the painful truth.

This Sunday afternoon the icy white sky was streaked with gray and the autumn breeze lingering. Those who gathered in the parking lot of the New Jerusalem Baptist Missionary Church moving forward, warmed by their common goal. In 1893, a black man by the name of Dana Adams, a black man who did not want to leave the Union Pacific railway depot when a white man had told him to, was lynched by a mob in Salina.

The Rev. Delores “Dee” Williamston greeted the crowd on October 24. She was one of the three, along with Sandy Beverly and the Reverend. Martha murchison, behind the commemorative efforts. The three teamed up for “The Dana Adams Project 1893” after a local memorial service for George Floyd.

In front of the crowd was a long, narrow table. Large earthenware dishes were placed on it, next to glass jars bearing Adams’s name. The earth had been recovered from the site of the Adams lynching.

â€œThis dust contained the blood and violence that ended the life of one of your loved ones,â€ Murchison said in his opening prayer. â€œToday, as we collect this dust of life, we also collect the stories we have told from days gone by. And we collect the stories that we haven’t told. Today we come to tell a story that we took a long time to tell.

This earth collection service brought together religious leaders and institutions of the city, representatives of the Equal justice initiative and a columnist from Kansas, all to listen, learn and commemorate this man. In some ways it looked like a service I attended at Lawrence two weeks before. The glass jars were filled with soil, and the crowd was invited to both participate and ponder the long denied justice.

But in other ways, this service was different. Michaela clark and Keiana West were close at hand, for example. Both are Justice Initiative Fellows based in Montgomery, Alabama, and they gave the crowd a glimpse of his work.

At one point, Clark stepped back to give an overview of the scourge of racial terrorism that spread to the United States after the Civil War.

â€œWe have been retracing this story from Reconstruction in this period, we identify as the era of racial terror lynching, from 1865 to 1950, in which more than 4,000 black men, women and children were lynched, â€she said. “And it was not just the actions of a few vigilantes, but rather entire communities involved in this violence.”

After the event, West noted that towns – like Salina – allowed the lynchings. These massacres were certainly not the work of a few bad apples. Terrorism required the assent of several levels of power.

“These are often lynchings of public shows, and the whole community was really complicit in it,” she said. â€œWhether it was law enforcement or municipal governments, senators (they) were often part of the crowd. Even though they were not part of the mob, they did not protect the black people who were lynched, and they did not prosecute or investigate the lynchings, and did not hold the white crowds to account.

“Caring for a family member”

Yet, if communities can shame themselves in the long term, they can also recognize this past and learn from it. You could say it was a small town than Lawrence, who prides himself on friendships and relationships. I spoke to a crowd member about my internship at Salina newspaper two decades earlier, and we swapped names of common acquaintances.

To this crowd, Dana Adams was no stranger.

They might not have learned her story until recently, or they might have read it on a document for the first time that day. But he was from Salina. He was under their responsibility. Was there any soul-searching? Sure. But what I heard, saw and felt was a desire to do things right for this young man, even with almost 130 years of age.

Williamston told the crowd about his trips to Gypsum Hill Cemetery, where a gravestone for adams had been placed on June 17, 2009.

Now filled with soil, the pots bearing Adams’ name will go to the Legacy Museum of the Equal Justice Initiative as part of the Community Remembrance Project, as well as the Kansas African American Museum in Wichita and other state museums. .

RECEIVE MORNING TICKETS IN YOUR INBOX

As I walked back to Lawrence this Sunday afternoon, one point pestered me. Too many of us are willing to give our ancestors a free pass. We imagine that racism and violence were evident in previous decades and centuries. No one could have known that these things were wrong, we reassure ourselves. They wouldn’t have done it any other way.

It is a self-deceptive lie. Racism and racist violence have always been shameful.

They were wrong two weeks ago, when I made the same point in my column on the Lawrence service. But looking at otherwise rational Kansans defend by keeping the name of a Klan leader in a high school this week, it’s clear that we can’t repeat this lesson often enough. Seeing the nation convulse over the act of teaching about our country’s sometimes shameful past makes it clear that we all need to educate ourselves.

This afternoon, there, Salina led the way.

After the event, Murchison said, organizers took Clark and West to the lynching site and then to the cemetery. They placed the flowers of the service on Adams’ grave. The coalition hopes to put in place a historical marker commemorating the lynching next year, June 17.

â€œWe are very grateful for the support of our community which helped make (Sunday) possible,â€ she said. â€œWe shared stories about the people who helped, talked about the history of Salina and Kansas and our hope to educate future Kansans about our history.

â€œOverall our mood was gratitude. “