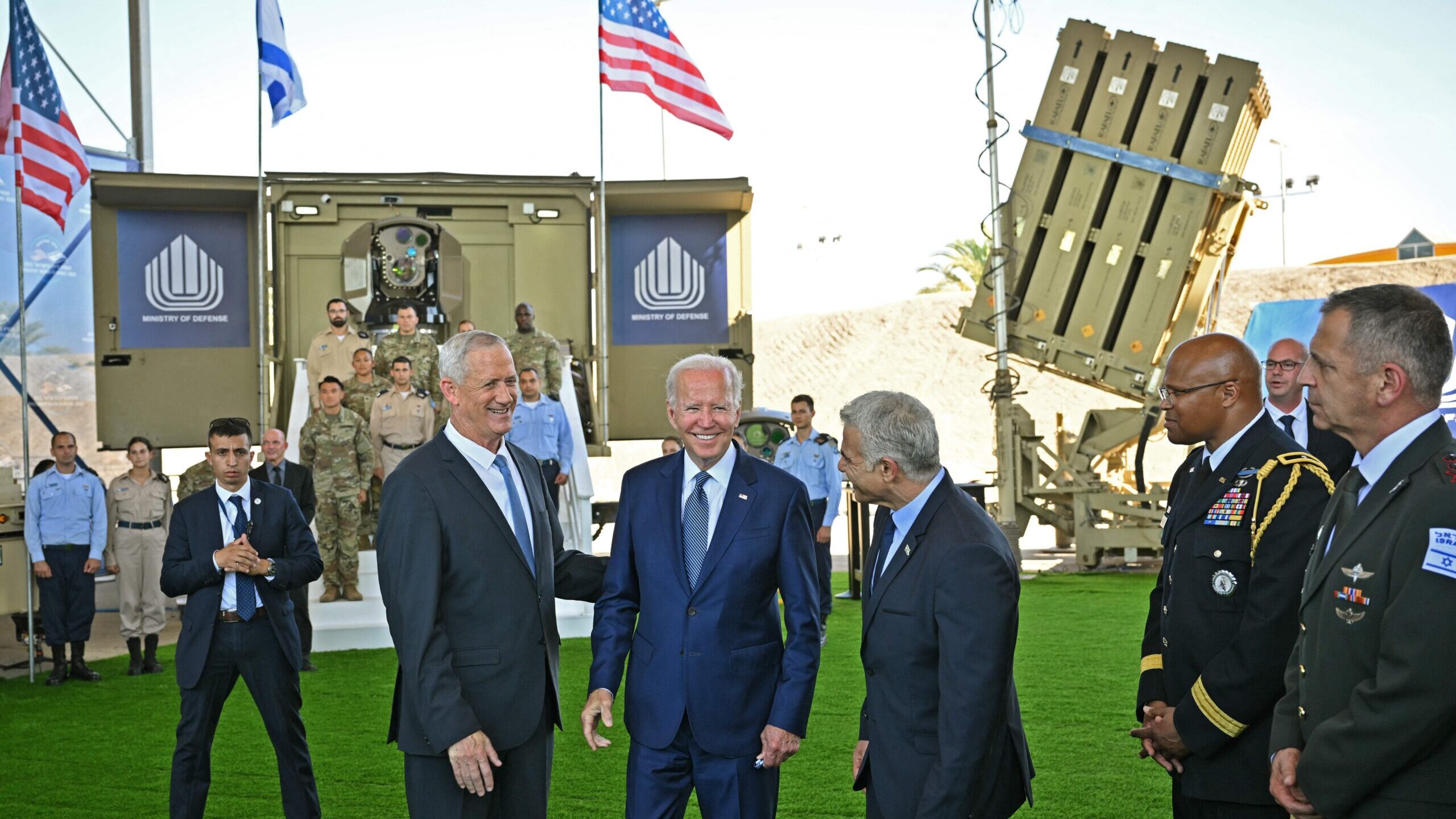 US Should Attract Regional Players to Israel for Directed Energy Development

US President Joe Biden (2nd R) smiles as he poses in front of an Iron Beam (L) and Iron Dome air defense system (R) with Israeli Defense Minister Benny Gantz (L) and others during a visit to Ben Gurion Airport near Tel Aviv on July 13, 2022. (Photo by MANDEL NGAN / AFP) (Photo by MANDEL NGAN/AFP via Getty Images)

Tectonic strategic shifts may be underway in the Middle East, but President Joe Biden’s trip to Israel included a demonstration of a futuristic tactical shift: using lasers to take out aerial threats from the sky. Israel has taken the lead on the technology and is eager to get the US on board. In the op-ed below, former US Missile Defense Agency director Henry Obering, who advises Booz Allen on directed energy, says the US should accept Israel’s offer to better protect US interests in the region.

As President Joe Biden toured the Middle East, one of his first stops was to see an Israeli air defense system known as the Iron Beam.

On February 1, 2022, then-Israeli Prime Minister Naftali Bennett announced that Israel would create a “laser wall” within a year that would protect the country against rockets, missiles and drones. This claim sounds overly ambitious but highlights the rapid advances in directed energy technology. Israel’s state-owned Rafael produces the ground-based Iron Beam with a range of 4.3 miles, while Israel’s Elbit is developing an airborne laser that attaches to planes.

Israel faces many threats in the region, but they are not the only ones. In the face of mounting Iranian-backed aggression throughout the Middle East, the United States should also engage in the joint development of directed energy defense systems that could provide more effective and improved security for all. U.S. allies and partners, including Gulf countries.

Biden’s trip coincided with Israel’s recently revealed efforts to create an unprecedented interconnected regional air defense system. The first steps in building this architecture are the formation of a common air threat picture, R&D and technology sharing. In this, Biden should work to facilitate the introduction of Israeli defense technology into the Gulf states, perhaps even down to laser defenses, as a recent report suggests.

Directed energy systems, such as Iron Beam, could significantly reduce projectile interception costs. A single-use Israeli Tamir interceptor for an Iron Dome battery costs between $40,000 and $100,000, while militants frequently fire ammunition costing only a few hundred dollars – a cost equation that encourages aggression. Iron Beam, although expensive initially, only requires electricity to operate and could reduce the cost of each intercept to around $2.

Once operational, laser air defenses would have immense benefits for US personnel and regional partners in the Middle East, who routinely face Iran-linked mortars, rockets, missiles and drones. Iran’s regional proxies fired around 740 projectiles at US personnel and Arab countries in 2021, up from around 500 in 2020, according to data from the Jewish National Security Institute of America. These groups are set to set another record this year, having already launched more than 400 projectiles in the past six months.

To defend against this threat, the United States sent air defenses to Iraq, Saudi Arabia and the United Arab Emirates (UAE) which intercepted projectiles linked to Iran. But these deployments have been too small, slow and often temporary.

RELATED: In addition to killing drones, Israeli laser knocks mortars out of the sky, army says

The JINSA data also highlights the growing threat from Iran’s unmanned aircraft systems (UAS), commonly referred to as drones. Between 2018 and 2020, drones accounted for less than 40% of munitions that Iranian-backed groups fired at the US and its partners in Iraq, Syria and Saudi Arabia, but have accounted for half of projectiles since 2021 In February, US planes shot down two Iran-linked drones in Iraq headed towards Israel, which is believed to have been part of an evolving air defense partnership involving Israel and Arab countries.

Directed energy could be particularly useful as counter unmanned aircraft systems (C-UAS) due to their ability to neutralize small swarming objects that current platforms lack. Israel’s F-16 and Iron Dome aircraft have intercepted drones before, and the United States has deployed several C-UAS options, but no system can effectively track or intercept the wide array of evolving threats. The Pentagon should explore collaboration with Israel on this important emerging technology, as it has done in the past with other air and missile defense capabilities.

The development of directed energy would also make regional partners less sensitive to Washington’s delays or hesitations in resupplying air defense interceptors. America’s regional partners have expressed concern about its commitment to the Middle East. Despite Biden’s pledge immediately after the May 2021 conflict between Israel and Hamas to rearm Israel with Tamir interceptors for the Iron Dome, Congress struggled to pass the necessary appropriations for ten months. Such a delay in a major conflict could be disastrous.

However, lasers are not a panacea. Although they operate at the speed of light, can be recharged for deeper and more cost-effective chargers, provide near-instantaneous tracking and engagement, and generally operate at unseen wavelengths for a low probability of detection, current technologies have several weaknesses. Many systems currently do not work well in poor atmospheric conditions and are relatively limited in power and range. Therefore, directed energy is not a replacement for other kinetic defenses but a means to provide an improved and wider range of defensive capabilities against the multitude of threats at lower cost.

To take full advantage of this emerging technology, the United States and its partners should enhance their collaboration on joint air defense R&D, including directed energy. If tests of Iron Beam or other Israeli technologies prove successful, Congress should consider co-producing these systems, as it has done with Iron Dome.

Retired U.S. Air Force Lt. Gen. Henry A. Obering III served as Director of the Missile Defense Agency and is a Fellow of the Jewish Institute for National Security States Iran Policy and Security Projects States (JINSA). He provides executive advice to Booz Allen for their ongoing directed energy efforts in the United States, but is unrelated to the Iron Beam effort in his industrial capacity. Ari Cicurel is a senior policy analyst at JINSA.