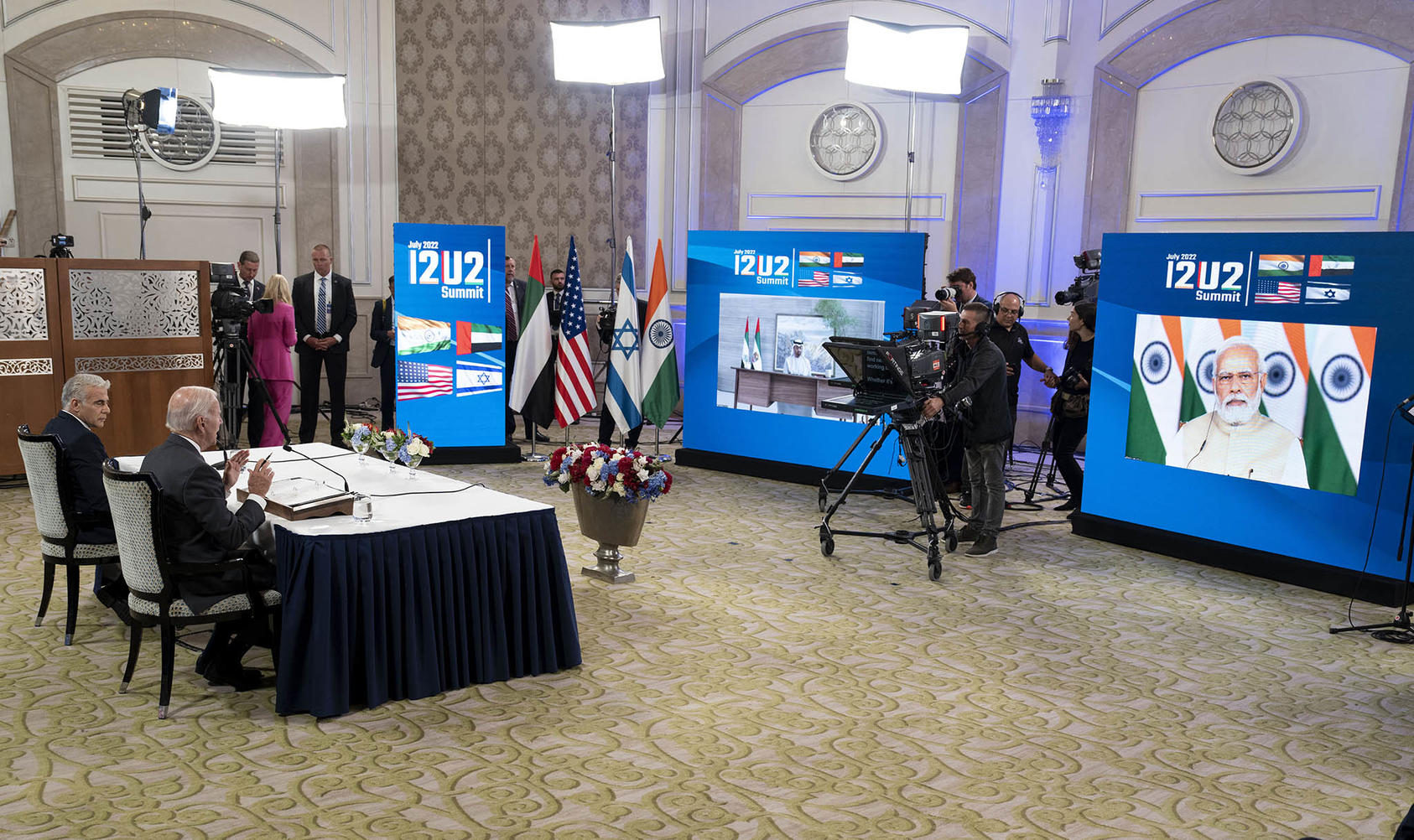 What you need to know about I2U2

Is there some sort of normative vision or principle behind I2U2?

Markey: Each of the leaders of I2U2 stress the group’s desire to mobilize capital and technologies from the private sector to solve concrete and shared challenges. Trade and transit infrastructure, clean energy, waste treatment and critical and emerging technologies have all been identified as priorities. However, a comprehensive and principled vision of what unites these four states in partnership was largely missing. The omission is noteworthy in part because I2U2 often draws comparisons to the Indo-Pacific “Quad,” whose members – Japan, the United States, Australia and India – often point out. the unifying force of their democratic practices.

Practical cooperation may be enough to support I2U2. That said, an ambitious vision of the group’s core identity wouldn’t be so hard to come by, given the striking religious diversity of its members. By emphasizing their shared commitment to pluralism and cooperation between religions, I2U2 could become a venue for cooperation on a variety of other initiatives. It could combine pragmatic, development-oriented problem-solving with peacebuilding across religious and community divides. Furthermore, the change would provide the Biden administration with a way to expand its view of the world order from one primarily defined by “democracy versus authoritarianism” to one that takes into account other important characteristics of national identity and helps to build different kinds of bridges with strategic but non-democratic partners like the United Arab Emirates. Third, an I2U2 that advances pluralism in its member states could also encourage the practice of related values ​​– including the protection of minorities, religious and human rights – within them as well.

What is the objective of these countries with the I2U2?

Markey: India sees clear and tangible benefits from I2U2, starting with the group’s first two announcements: a $2 billion investment and technology support for agricultural initiatives in two Indian states, Gujarat and Madhya Pradesh; and support for a hybrid renewable energy project in Gujarat. I2U2 thus offers a model and a platform for a sustained mobilization of capital from the United Arab Emirates supported by Israeli and American technologies and championed by Washington.

Moreover, given India’s close ties to Israel and the United Arab Emirates, New Delhi has much to like about I2U2 as a diplomatic device to accelerate, deepen and secure the ongoing normalization of relations between Jerusalem and the United Arab Emirates. Abu Dhabi. Israel provides critical military technologies to India, but previous generations of Indian rulers tended to downplay these defensive ties, partly for domestic political reasons and partly to appease their Arab neighbors. These days, Prime Minister Narendra Modi has the luxury of being shameless in his dealings with his Israeli counterparts. To be sure, the Abraham Accords and I2U2 do not entirely solve India’s balancing act in West Asia, given New Delhi’s persistent wish to maintain good ties with Tehranbut they help.

Finally, I2U2 offers India the opportunity to cooperate with the United States on its own terms: not as a junior partner or formal ally, but as a self-confident and “strategically autonomous” partner. I2U2’s emphasis on voluntary economic initiatives rather than binding multilateral trade agreements (such as the Regional Comprehensive Economic Partnership) that India has repeatedly rejected is also attractive. In this narrow respect, I2U2 resembles Washington’s New Indo-Pacific Economic Framework, which India has also signed up to.

Yousef: The UAE is striving to become one of the most globally connected players in the region. One of the pillars of this strategy is to pivot towards Asia. But unlike the US pivot to Asia aimed at confronting China, the UAE sees China as one of its main partners in achieving this objective. I2U2 is also one of the ways the UAE balances its relationship with its two main Asian partners: China and India.

The rapid advancement of UAE-India relations started around 2015. The UAE is India’s third largest trading partner and earlier this month they signed a free trade Agreement this is expected to increase their two-way trade from $59 billion to over $100 billion in five years. The UAE also recently signed a free trade agreement with Israel and plans to increase annual bilateral trade to over $10 billion over the next five years. A year after the establishment of relations, the trade reached 885 million dollars, according to Israeli Minister of Economy. It remains to be seen whether this goal would be exceeded through I2U2’s commitment and projects.

Since its establishment, the United Arab Emirates has maintained strong relations with the United States. The I2U2 summit and a bilateral meeting on the sidelines of the summit with the countries of the Gulf Cooperation Council and Egypt, Jordan and Iraq helped to overcome some tensions with the Biden administration and to postpone some of them. ‘others.

The UAE and India are focused on pursuing economic cooperation through I2U2, and it appears that the United States and Israel are willing to follow this approach. However, it’s unclear if any of them will introduce geopolitical objectives into I2U2 in the future. This would be problematic as the countries in the group have conflicting positions on how to deal with China, Russia and Iran, which could affect the future of the group and its prospects for success. The UAE in particular will endeavor to avoid this risk. Israeli Ambassador to India stressed that the band is “against no one”, adding that “it’s for our people and to make the world a better place”, an important message that has not been given enough airtime.

The Jerusalem Declaration signed during the Biden reflects the strength of Israel’s relationship with the United States. I2U2 is also a demonstration of the extent to which the United States is committed to advancing Israel’s integration into the region, especially since the Abraham Accords laid the groundwork for the creation of this group and that the Biden administration has pledged to support this process.

Israel’s newly established relations with the United Arab Emirates have been quite warm and are progressing at a rapid, perhaps even surprising pace. Besides the Eastern Mediterranean Gas Forum and the more recent Negev Forum, I2U2 is the most visible platform that Israel shares with an Arab country.

Israel has considerably developed its relations with India since the 1990s. Negotiations around a free trade agreement have made substantial progress, in a context of intensification of economic cooperation between Israel and India. First, Israel-India bilateral trade has increased from $200 million in 1992 – when India officially established its embassy in Tel Aviv – to $6.35 billion in 2021. Second, the Haifa port project which was initially awarded to China and which the Pentagon repeatedly warned Israel to cancel, allegedly attributed to a mixed indo-israeli bid that will operate the port until 2054. Third, Israel is India’s main defense supplier: India accounts for 42% of Israeli arms exports with an estimated annual value of $1 billion. Between 2015-2019, Indian arms imports from Israel increased by 175%. I2U2 and the projects agreed at the summit are likely to significantly increase India-Israel bilateral trade.

What are the current and future areas of cooperation and the potential risks for the group?

Youssef: Cooperation between I2U2 members represents key areas of the 21st century global economy. The group should avoid getting into geopolitical issues that could derail its main objective. For example, a number of experts fear that the current foreign workforce in the United Arab Emirates will be replaced by Indian workers. Another danger is that I2U2 will fall victim to mission creep. Although the group should not disperse too much, I2U2 can expand by advancing cooperation in new areas in the future or by continuing cooperation with other partners in the Middle East and South Asia.

I2U2 has enormous potential, and its composition offers many opportunities for win-win cooperation. The United States has vast capabilities in every conceivable field; India has massive human resources and talents; Israel has advanced technology in a number of important areas; and the United Arab Emirates are promoting innovative policies, attracting start-ups and are ready to invest substantial resources. However, the burden of its sustainability will fall primarily on the UAE and Israel – the primary beneficiaries – to maintain US and Indian interest and justify its continuation.

Can Israel have a stable government?